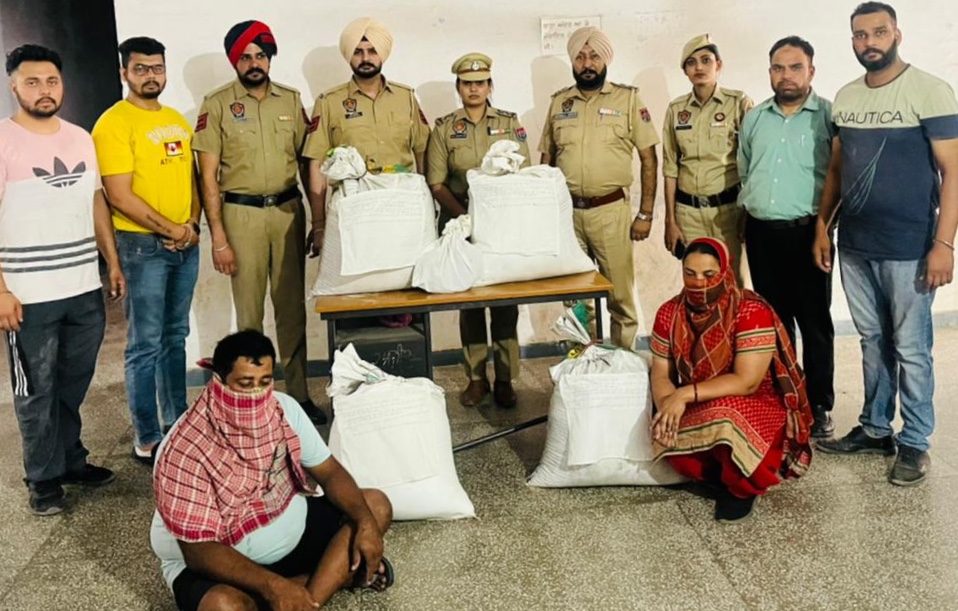 The accused couple with the seized contraband at the Sudhar police station in Raikot.

The Sudhar police claimed to have arrested four persons and booked them under two separate cases on Saturday.

The DSP, Dakha, Jatinderjit Singh, said police personnel, led by SHO, Sudhar, Kirandeep Kaur, apprehended the transporter couple of Buraj Littan, who had been involved in smuggling of drugs and narcotics from Jharkhand under the guise of transportation of coal powder and other coal products for over one year.

Though exact modus operandi of the accused is yet to be ascertained, preliminary investigations revealed that the main accused used to take his wife along while carrying contrabands with intent to avoid suspicion by the police deployed at various interstate nakas from Jharkhand to Punjab.

An FIR under the NDPS Act was registered on the basis of secret information collected by SI Nirmal Singh on Saturday and the accused were arrested in the afternoon at a naka organised at Kailey Chowk on the Halwara-Pakhowal road under the supervision of SHO Kirandeep Kaur. The truck used in the crime was also impounded.

In another case, registered under the Gambling Act, Kamaljit Singh, alias Bonny, and Shakeel Khan, alias Bablu, were arrested by the police, led by ASI Gurcharan Singh. The accused were attracted people to gamble by offering them 70 times the amount put on stake by recording certain digits and numbers.