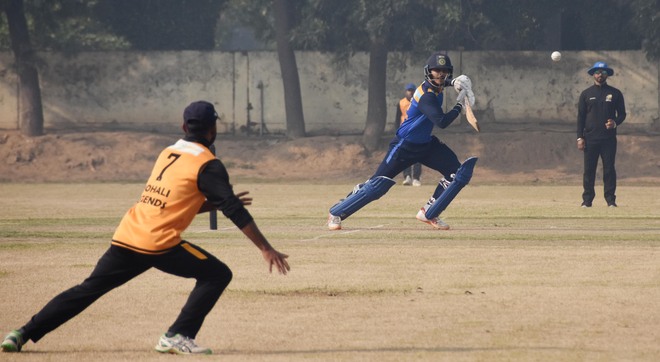 Punjab Blues batsman plays a shot in a match against Mohali Legends in the Trident Cup T-20 Cricket Tournament in Ludhiana on Tuesday. Photo: Ashwani Dhiman To go wisth story by Anil Datt

Both teams, with some established players (IPL and Ranji) in their ranks, proved their mettle and came out triumphant to begin the title hunt in a positive note.

In the first match, Punjab Blues posted a big score of 175 runs for the loss of five in which opener Sanvir Singh and Abhijit Garg shared a 98-run partnership for the first wicket.

Abhijit played an entertaining innings of 52 runs off 35 balls that was studded with three sixes and four hits over the ropes while Sanvir remained unbeaten on 98 which he made off 60 balls with the help of seven sixes and an equal number of fours.

For Mohali Legends, Maninder Singh and Soharab Dhaliwal took two wickets each after conceding 25 and 27 runs, respectively, whereas Jasinder secured one wicket for 37 runs.

Facing a daunting task of scoring 176 runs for victory, Mohali Legends began its reply on a solid note but lost the steam midway and found themselves struggling at 86 for 6 after 13.4 overs. Eventually, they could muster 136 runs after losing nine wickets and made an exit from the tournament.

For the winners, Karan Kalia was the main wicket taker, chipping in with four for 13 in four overs while Rahul Sharma got two wickets, Baltej Singh and Barinder Sran grabbed one each.

Sanvir was named man of the match

In the match played on the Hara Academy ground, the JDCA XI scored 111 runs for the loss of eight wickets which included eight penalty runs. Azam Nazar top scored with 39 runs and was followed by Abhishek Gupta and H Satyawan, who contributed 22 and 20 runs, respectively.

For Punjab Reds, Sandeep Sharma and Sidharth Kaul captured two wickets each after giving away 27 and 17 runs, respectively, while Harpreet Brar and Gurkeerat Mann claimed one wicket each.

For the JDCA XI, Prerit Dutta scalped two victims and Harit Sachhar, Arun Kaila and K Kukreja got one wicket each.

For his all-round performance, Gurkeerat was declared the man of the match.