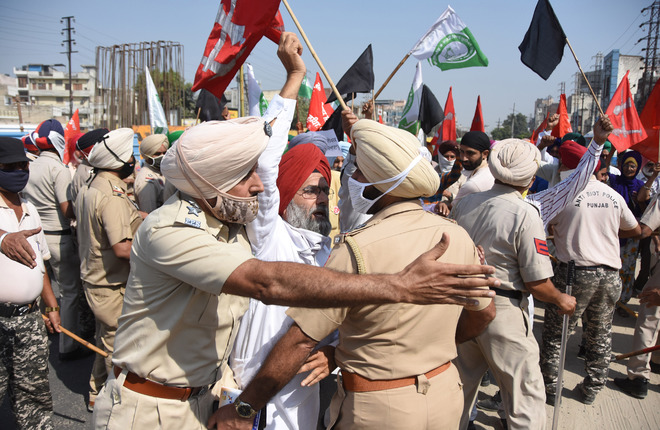 Police personnel try to control protesters during a farmers' protest near the venue of a BJP meeting in Ludhiana. Tribune photo: Himanshu Mahajan

They were protesting against the farm Acts and demanded from the Central Government to revoke these laws at the earliest. Raising slogans against the Centre and the PM, they burned an effigy to express their anger.

Sharma was here to attend a programme at Maharaja Regency on Ferozepur Road, Ludhiana. Farmers gathered outside the venue to mark their protest.

Addressing the gathering, farmer leaders claimed that the laws are against the interests of farmers and traders and aim to benefit big corporates.

They accused the BJP of misguiding the farmers and people over the laws. They further accused the Centre for not implementing the recommendations of the Swaminathan report.