Mayor orders MC officials not to release payments to contractors; they will be asked to recarpet damaged roads again 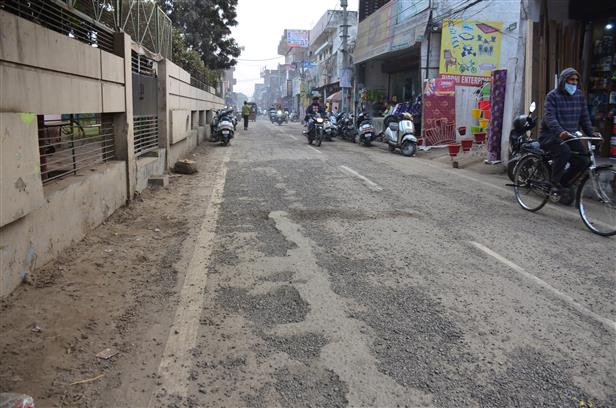 After the recently recarpeted roads have broken down within days or weeks, the Opposition parties are raising questions over the poor quality road works done by the Municipal Corporation and Ludhiana Improvement Trust in different parts of the city. No concrete action has been taken against those responsible for the negligence.

The road projects worth crores of rupees had started in different parts of the city amid the winter season just before the Assembly elections. The recent rainfall exposed the poor work as potholes have appeared on many of the recently recarpeted roads.

Also, the Malhar Road Shopkeepers Association raised questions over the recarpeting work on Malhar Road where the Smart Street project under the Smart City Mission is underway as the road is getting damaged too after rainfall. The repair work of potholes on different roads that the MC had conducted has also washed away in rain.

Leader of Opposition in the MC House Jaspal Singh Giaspura of the Shiromani Akali Dal said he had raised the demand before the MC House to appoint a nodal officer to keep a check on the construction or recarpeting of roads but nothing was done. “The recently recarpeted roads have badly damaged within a short period in the city. No steps were taken to collect the samples of these roads. Even without inspection of the roads, payments were released to the contractors. A probe should be conducted in this regard,” he said.

Punjab AAP spokesperson Ahbaab Singh Grewal has raised questions over the role of the authorities concerned for ignoring bad quality road works. “It is a sheer wastage of public money by constructing such poor-quality roads that get damaged within a short period. It seems to be a scam. If the AAP is voted to power, we will get an inquiry done and action would be taken against the guilty,” he said.

When contacted, Mayor Balkar Singh Sandhu said he has ordered the MC officials not to release payments to the contractors.

“It seems there was some fault in the bitumen material that was used for recarpeting. We are looking into the matter. The contractors would be asked to recarpet all the damaged roads again,” he said.