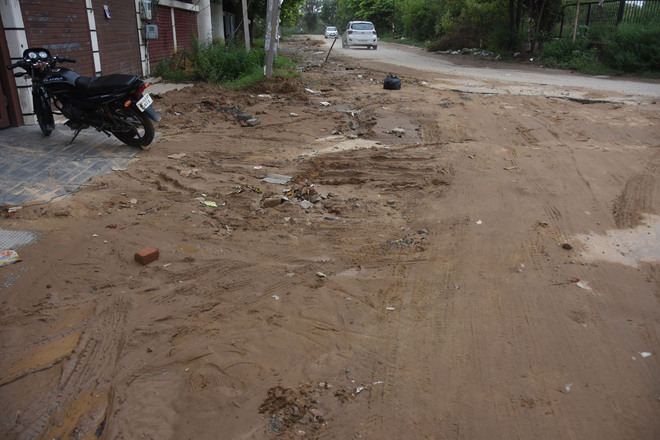 The stretch in a poor state after installation of sewer pipes in E-Block of BRS Nagar in Ludhiana. Photo: Ashwani Dhiman

Residents and commuters are a harried lot due to the dilapidated condition of a stretch after installation of sewer pipes near Telephone Exchange at the E-Block of BRS Nagar here.

The residents said a car had got stuck on the stretch for nearly two hours after rain yesterday. Also, two-wheeler riders generally lose balance while pedestrians also face inconvenience due to the slippery conditions on the stretch after rain.

The residents said after installation of the sewer pipes, the level of the road was not corrected by the MC, Ludhiana. Even no caution boards had been displayed to alert commuters, despite there were chances of cave-in.

A resident, Lakhbir Singh, said: “The road was dug up for installation of pipes over a month ago. Since then, the flying dust has been troubling us in routine. After rainfall, the situation turned worse as pits have appeared on the stretch. Even, it is difficult for us to step out of our house. Commuters also face troubles due to the dilapidated condition of the stretch. The MC should take steps to resolve the issue.”

Another resident said: “A car that had stuck in a pit due to muddy condition of the stretch yesterday was pulled out with the help of a machine. As the rainy season has just started, the public may face more problems in the days to come, if no action is taken by the authorities concerned. It is the responsibility of the civic body to pay timely attention and get the road stretch levelled and repaired without any further delay. It must take immediate steps to avoid cave-ins and ensure safety of people.”

Despite repeated attempts, Superintending Engineer Ravinder Garg could not be contacted for comments.