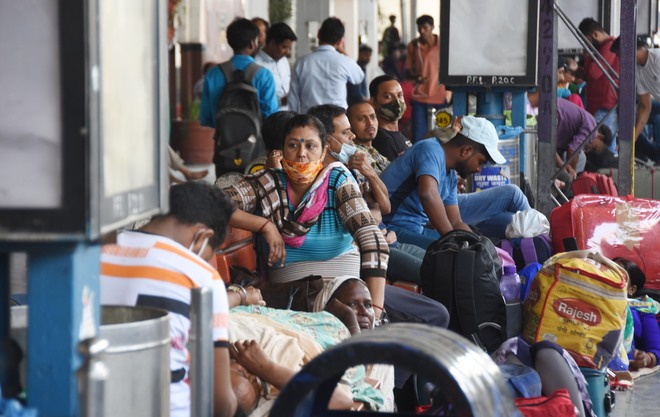 Passengers wait for the Shatabdi Express at the railway station in Ludhiana on Monday. Tribune photo: Himanshu Mahajan

Rail passengers remained a harried lot with several trains cancelled, rescheduled and stranded at intermediate stations due to blockade of rail tracks at several places by farmers as a part of their call for Bharat bandh today.

Railway officials said due to the farmers’ protest seven trains were cancelled for the day, one for tomorrow, seven others were rescheduled and two trains were short-terminated.

According to information made available by the Railways, rail tracks were blocked on at least six places on the Ludhiana-Jalandhar, Ludhiana-Firozepur, Ludhiana-New Delhi and Ludhiana-Chandigarh sections due to which trains were stopped at intermediate stations.

Stranded railway passengers were furious over the farmers disrupting the rail traffic as according to them the Railways had nothing to do with the agitation. “Farmers have a grudge against the Modi government and they could carry on their protest against the Centre. But due to rail roko, thousands of passengers are being made to suffer for no fault of theirs, just because trains are a soft target and it is very easy for even a small group of protesters to block the tracks and disrupt rail traffic,” said a passenger waiting at the railway station here to board a train for Gorakhpur.