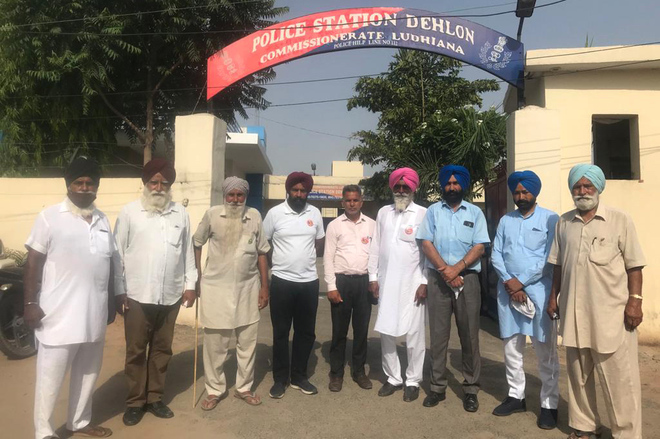 Farmers come out of the Dehlon police station after attending a meeting with officials on Wednesday. Tribune Photo

The district administration’s attempt to persuade activists of Sanyukat Kissan Morcha (SKM) to withdraw dharna from the main entry of the Dry Port at Kila Raipur has once again proved futile.

Protesting farmers have argued that the agitation was aimed to get farm laws repealed and it was not a local issue which could be resolved through talks with the local administration.

Officials, led by Joint Commissioner Dr Sachin Gupta, ADCP Jaskaran Singh Teja, SDM Baljinder Singh Dhilon and ACP Jashandeep Singh Gill, had appealed to the protestors to withdraw their protest in view of the pandemic and a writ petition filed by owners of Dry Port.

A delegation of leaders of the SKM and Zamhoori Kissan Sabha led by Harnek Singh Gujjarwal, district secretary, Shaheed Bhagat Singh Naujawan Sabha, Punjab; had participated in a meeting of senior functionaries of administration held at the Dehlon police station today.

SHO Dehlon Sukhdev Singh Brar acknowledged that stalemate continued on the issue of lifting dharna from main entry of the Dry Port at Kila Raipur even though senior functionaries of the administration had made an appeal keeping in view risk of the pandemic besides other law and order issues.

Officials claimed that the meeting was held in routine with intent to persuade protesters to withdraw their agitation and to check harassment of labourers willing to work at the port. However, the protestrrs alleged that the administration was acting to facilitate normal functioning at the port owned by Adani Group.

Gujjarwal alleged that the administration has been trying to get the dharna lifted on the instance of owners of the Dry Port.

“We have decided not withdraw our movement at any cost till the Union Government repeals the three farm laws,” said Harnek Singh Gujjarwal arguing that the dharna was not laid on protest of some local issue. Farmers said any oppressive action by the administration would be answered with patience and peace.