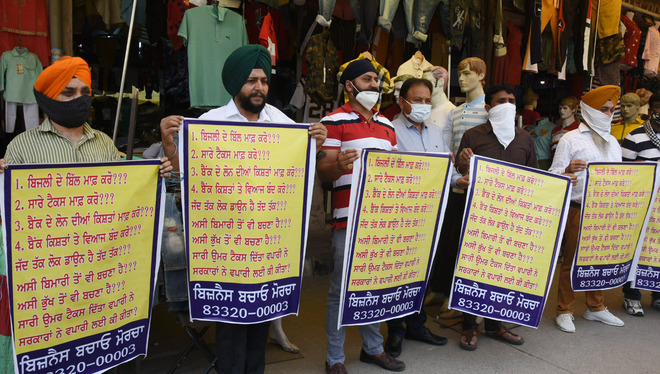 Traders, under the banner of the Business Bachao Morcha, launch a poster drive in Ludhiana on Friday. Photo: Ashwani Dhiman

A large number of traders under the banner of the Business Bachao Morcha today held a protest against the government while also launching a poster drive to highlight their problems arising out of the Covid-induced lockdown and restrictions. They said through posters they would question the government regarding poor arrangements in hospitals and zero benefits to people during the pandemic.

Speakers, including Gurdeep Singh Gosha, Sunil Mehra, Vinod Jain, Rubal Dhall and Bittu Gumber, said it was shameful that there were no beds in hospitals, oxygen was scarce and private hospitals were fleecing Covid-hit people.

“Healthcare system has totally collapsed and the government has no arrangements to save lives of people,” they lamented.

Leaders of the morcha said the government had imposed restrictions and the entire business community was adversely affected. Under such circumstances, the government had not provided any relief to people, they asserted. The least the government could do was to provide relief in electricity bills, loan installments and other taxes, they added.

They said due to policies of the Centre and the state government, traders, industrialists and businessmen were forced to shut their shops while the ruling dispensation was watching the dismal scenario like a silent spectator.