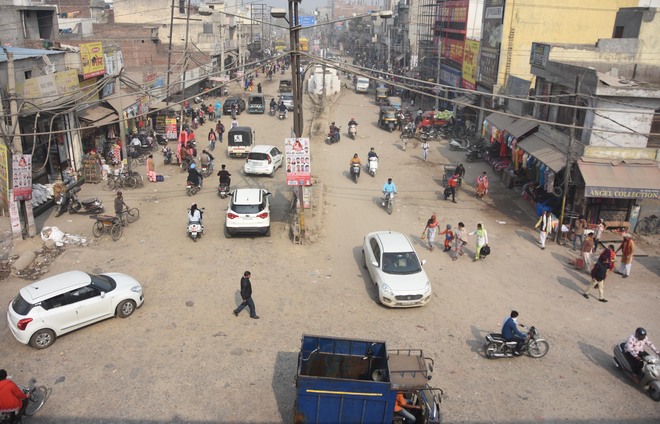 Basti Jodhewal Chowk located on the 5National Highway-44 is also one of the deadly black spots declared by the Ludhiana police.

As per a study conducted by the police, as many as nine persons have lost their lives at the spot in three years (2016, 2017 and 2018) after they were hit by speeding vehicles. Most of these victims include pedestrians, cyclists and two-wheeler riders.

The construction work of Rahon Road at Basti Jodhewal is on for the past few years, which is causing traffic congestion near Jodhewal Chowk.

Service lanes are not constructed in a proper way on both sides of the road. Encroachments and wrong parking of vehicles on the road are also adding to traffic woes.

There is only one crossing point under the bridge to pass through Basti Jodhewal Chowk and on both sides of the point, there is a 12X12 sq ft area, which is left unpaved and restricted for traffic movement due to which the width of road is not sufficient for vehicles to pass. The Municipal Corporation, Ludhiana, has encroached the service lanes on both sides of the road for dumping garbage.

Road leading towards Shivpuri or the Rahon side, where a large number of industries exist, hardly remain free from traffic hurdles. Many times, fire tenders get stuck in traffic at the chowk.

Residents of the area alleged that there were no proper facilities of blinkers, speed breakers, zebra crossing markings and signboards. Speed-limit board and speed radar are also missing.

During rainy days, rainwater gets accumulated on the stretch near the chowk.

There was a need to construct an underpass or overpass for pedestrians and two-wheeler riders at every 1 km in populated areas as well as those spots where factories were located, the ACP said, adding that they had already written to the Municipal Corporation and the National Highways Authority of India in this regard.