One person, one post: Will Gehlot choose CM-ship over Cong presidency? : The Tribune India 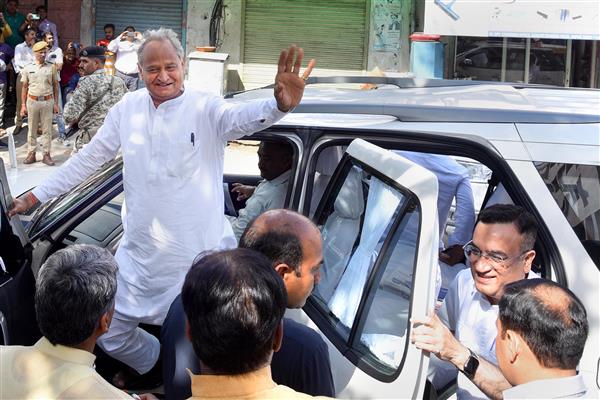 The unprecedented crisis in Rajasthan Congress has twisted the tale of Congress presidential election with the likelihood growing of Ashok Gehlot choosing chief minister-ship over top party post amid insistence on "one person, one post" rule.

Gehlot, 71, has just met AICC observers Mallikarjun Kharge and Ajay Maken in Jaipur with hectic deliberations under way on resolution of the crisis, which has roots in Rahul Gandhi's recent public announcement that the party's Udaipur declaration pledge on one person holding one post would need to be honoured.

Gehlot may well be contemplating opting out of the party presidential race with the Rajasthan Congress in a flux as over 90 MLAs close to the CM have resigned in solidarity with him.

Videos of parliamentary affairs minister Shanti Dharilwal have gone viral in which he is questioning the Congress high command'shaste in calling a legislature party meeting to replace CM Gehlot at a time when the latter is holding only one post.

"The issue of holding two posts would have arisen if Ashok Gehlot became party president, Today he is only CM," Dharilwal said amid talks that Congress President Sonia Gandhi is miffed at the turn of events.

While Gehlot is making it clear that he wants his will on Rajasthan CM-ship to prevail should he be expected to run as Congress chief, Sonia Gandhi had not factored the dramatic power play by the politician described as a magician in Rajasthan circles.

Gehlot for his part has all the while been maintaining that he will continue to serve Rajasthan, even as he has said he will do what the leadership wants him to do.

If push comes to shove and Gandhis insist that Gehlot must resign as Rajasthan CM while he files his papers for Congress chief's poll due on October 17, Gehlot is likely to end up choosing the state over AICC.

In that case, there would be only one candidate left in the party president's race as of today -- Shashi Tharoor unless a new nominee backed by Gandhis emerges with the name of Mallikarjun Kharge doing the rounds.

The ball is now in Sonia Gandhi's court. The future of Rajasthan and of the Congress will depend on her decision.

Rajasthan is one of the only two states where Congress is in power on its own. Chhattisgarh is the other.

A similar turn of events in Punjab had led to an AAP sweep in the state elections after Gandhis executed an unceremonious exit for then Punjab Chief Minister Amarinder Singh, who is now in the BJP.

The Congress had settled for Charanjit Singh Channi at the time. Channi had lost both the seats he contested in the 2022 state election.