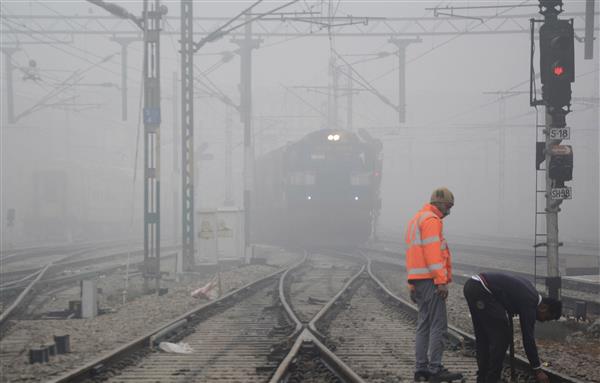 A train passes through a railway station amid low visibility due to dense fog on a cold winter morning, in Amritsar on Tuesday. PTI

For the third day in a row, a layer of very dense to dense fog engulfed North India with Bathinda in Punjab again reporting zero visibility at 0530 hours this morning.

INSAT 3D RAPID Satellite imagery showed continuation of a dense fog layer from Punjab and Northwest Rajasthan to East UP across Haryana.

A gray cloud patch over central parts of West UP persisted showing medium and high clouds associated with middle tropospheric level westerly trough and a fog layer lies below it.

The situation is expected to be repeated tomorrow, around Thursday night/Friday morning that it.

The IMD said that an improvement in fog situation and visibility is expected around December 22 night and December 23 morning due to decrease in relative humidity at lower tropospheric levels over Indo Gangetic Plains.

Dense to very dense fog conditions will continue over Punjab, Haryana, Chandigarh and Delhi, Himachal Pradesh and Uttar Pradesh during next two days and decrease in intensity thereafter, it said on Tuesday.

Apart from pollutants near the surface, the weather office attributed the condition to moisture and light winds at lower tropospheric levels over IGP.

Meanwhile, due to dry north/north westerly winds from Himalayas, cold wave conditions are likely to continue in isolated pockets over Himachal Pradesh, Punjab, Haryana and north Rajasthan for the next three-four days, it added.