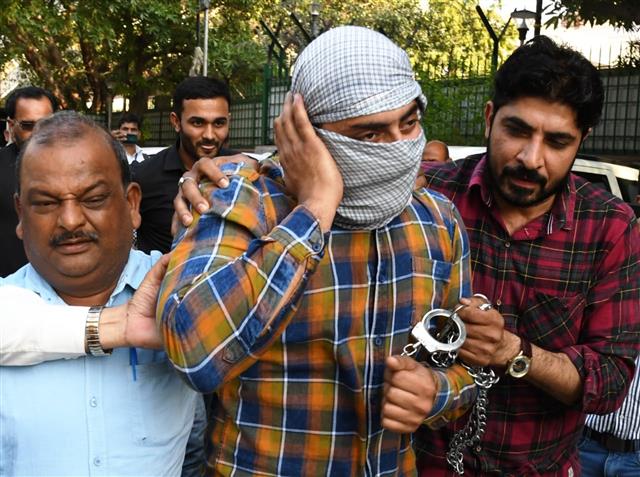 A Delhi court has framed charges of rioting and attempt to murder against Shahrukh Pathan, who had allegedly pointed a gun at a police officer during the 2020 Delhi riots, while rejecting his plea seeking discharge.

A photograph of Pathan pointing a gun at Delhi Police Head Constable Deepak Dahiya had surfaced on social media during the communal riots last year. He was arrested on March 3, 2020, and is currently lodged in Tihar Jail.

While framing the charges, additional sessions judge Amitabh Rawat said it was quite apparent that Pathan led a group of rioters, attempted on Dahiya's life, obstructed and used criminal force on a public servant on February 24, 2020.

The judge charged Pathan under sections 147 (punishment for rioting), 148 (rioting armed with a deadly weapon), 186 (obstructing public servant in discharge of duty), and 188 (disobedience to order duly promulgated by public servant) of the IPC.

Charges were also framed under sections 353 (assault), 307 (attempt to murder) read with section 149 (member of unlawful assembly guilty of a common offence) of the IPC and various sections of the Arms Act, to which he pleaded not guilty and claimed trial.

Pathan had sought discharge from sections 307 (attempt to murder) and 188 (disobedience to order duly promulgated by public servant) of the IPC on grounds that he had no intention to kill the cop and was unaware that section 144 of the CrPC was in force.

Section 144 of the CrPC prohibits the assembly of four or more people in a specific area.

Denying the relief, ASJ Rawat noted that “intention to kill” the cop was clearly made out from the statement given by Dahiya that Pathan aimed at his head and fired but he managed to escape.

The judge said contentions made by Pathan's counsel that he did not attempt to kill the cop but only threatened him by firing in the air cannot be a basis for discharge in the face of the specific statement by Dahiya and the video footage. PTI