Decision on Class 12 board exams by June 1: Education Minister Pokhriyal 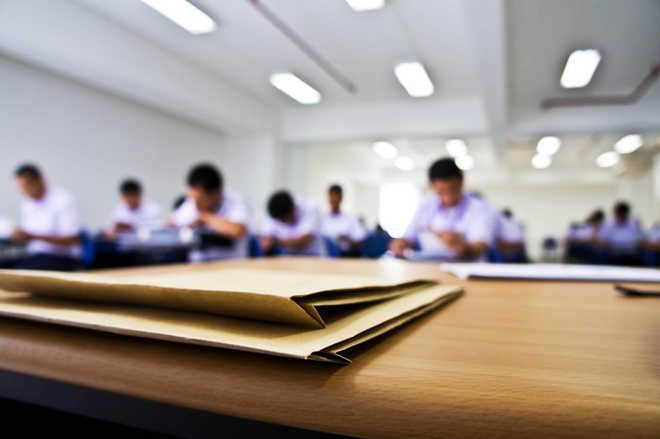 There is a broad consensus among states about conducting Class 12 board exams and an “informed, collaborative” decision will be taken by June 1, Union Education Minister Ramesh Pokhriyal ‘Nishank’ said on Sunday.

Expressing commitment towards the safety and security of children, the education minister called it the “first priority of the government” speaking at the national consultation chaired by Defence Minister Rajnath Singh on the conduct of Class XII and professional courses entrance exams.

According to the official statement, “broad consensus was there” but states have been asked to “further examine the matter and send feedback in writing by May 25”.

A majority of the states favoured holding the exams and said they would study the proposals mooted by the CBSE. One of the suggestions is said to be a short-duration exam of 90 minutes instead of three hours with objective-type questions and an option of three subjects.

Today’s discussions were held around two themes—board exams for Class XII by the Central Board of Secondary Education and other state boards and the all-India entrance examinations for various higher education institutions and professional courses.

Various options regarding the methodology, process, duration and timings of the exams were discussed.

Officials said the minister discussed the importance of the Class XII board exams and the all India entrance exams in “shaping the future and defining the careers of students”.

“Keeping in view present circumstances it was decided to cancel the CBSE board examinations of Class X and evaluate through internal assessment, but Class XII examinations are very important to decide the future of a student,” the minister said.

An “informed, collaborative decision” will remove the uncertainty among students’ and parents’ minds by informing them of the final decision at the earliest,” he added.

Today’s meeting was called to enable central and state boards and other examination agencies to be able to examine various options available in the present challenging circumstances through a consultation process.

The minister expressed commitment towards the safety and security of children and called it the “first priority of the government”.

Secretary senior officials of the ministry, chief ministers, education ministers and officers associated with the education system participated in the much-anticipated meeting on which the fate of lakhs of students depended.

Rajnath Singh said the ministry will consider all those suggestions and take a final decision soon and reiterated that the priority of the government to conduct all the examinations in a safe and secure environment.

I thank all the Hon'ble Chief Ministers, Education Ministers, and officers associated with the world's largest education system for participating in the high-level meeting chaired by Hon'ble Minister of Defence Shri @rajnathsingh Ji. pic.twitter.com/i4e8p5lH90

A large number of students and parents have been demanding cancellation of the board exams. The hashtag “cancelboardexams” trended on Twitter as the meeting was underway.

“It was proposed that the board can conduct exams in present format for major subjects and the marking for remaining subjects can be done on basis of performance in the papers for which offline exams will be conducted. The board said the exams can be conducted using this option and increasing the number of centres to ensure social distancing.

“The other option that was proposed was changing the pattern of exam. If this option is chosen, the exams can be conducted in home schools of students, the duration can be reduced to 90 minutes rather than 3 hours and the questions can be objective type. The students can also be given an option to appear for any three of four subjects in this format,” a senior official said.

Delhi Deputy Chief Minister Manish Sisodia said his government was not in favour of the options being explored by CBSE to conduct the exams and that going ahead with the process without vaccinating students would prove to be a big mistake.

“Delhi government is not in favour of these options. We cannot play with the safety of students just to fulfil our stubborn wishes. Conducting the examination by toying with students’ safety will prove to be a big mistake. There are over 1.5 crore Class-12 students across the country and 95 per cent of them are above the age of seventeen-and-a-half years,” he said at a press conference post the meeting.

“The Centre should talk to experts if they can be given the Covishield or Covaxin vaccines. The Centre should also talk to Pfizer to explore vaccination for the Class 12 students. It is a must to vaccinate students, especially with experts indicating that the third wave of the coronavirus will be more dangerous for children,” he added.

The Tamil Nadu government proposed conducting the exams after the Covid-19 situation subsides in the state.

“Like other states, Tamil Nadu also wanted to conduct the Class 12 board exams as it plays an important role in deciding students’ career,” School Education Minister Anbil Mahesh Poyyamozhi told reporters after meeting.

The CBSE had on April 14 announced the cancellation of Class 10 exams and postponed Class 12 exams due to the surge in Covid-19 cases. The decision was taken at a high-level meeting chaired by Prime Minister Narendra Modi.

The April and May edition of the engineering entrance exam JEE-Mains were also postponed. The board exams, which are usually conducted in February-March every year, were scheduled to be held from May 4.

The CBSE had announced that a decision on the Class 12 board exams will be taken on or after June 1. Schools across the country were closed in March last year to contain the spread of Covid-19 ahead of a nationwide lockdown. With PTI