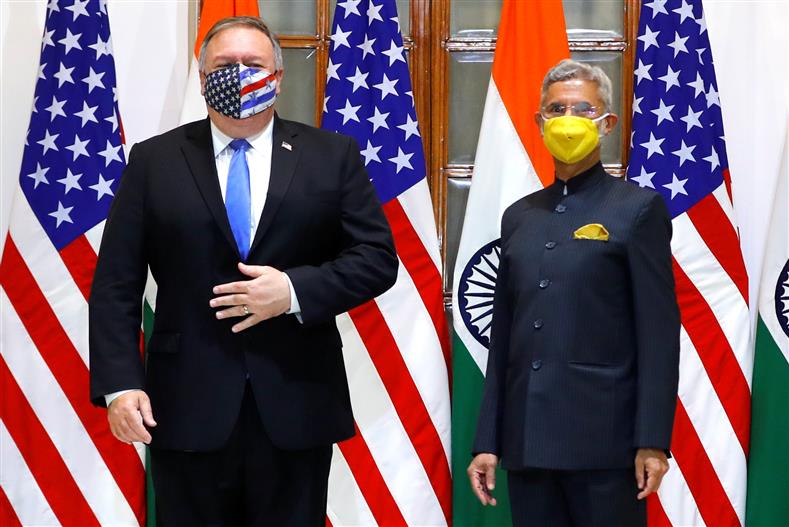 US Secretary of State Mike Pompeo and India's Foreign Minister Subrahmanyam Jaishankar stand during a photo opportunity ahead of their meeting at Hyderabad House in New Delhi, on October 26, 2020. Reuters

External Affairs Minister S Jaishankar had a “warm and productive” dinner engagement on Monday with US Secretary of State Mike Pompeo during which they followed up on their Tokyo discussions and focused on key bilateral, regional and global issues, said sources here.

In a follow up of Indo-US Indo-Pacific engagement and the Quad deliberations, Pompeo and Jaishankar discussed maritime security, counter-terrorism, open connectivity and resilient supply chains, they added. Pompeo had arrived earlier in the day with US Secretary of Defence Mark Esper to hold the 2 + 2 Ministerial with Jaishankar and Defence Minister Rajnath Singh. They will also call on PM Narendra Modi as well as meet NSA Ajit Doval.

The two Foreign Ministers reviewed the progress in bilateral ties over the last four years and were satisfied that they have grown in virtually every domain, including trade, energy, defence and education. They also drew comfort from the expansion of consultations on foreign policy issues, including regional and multilateral. This has led to both sides working more closely in multilateral and plurilateral formats.

Jaishankar stressed the uniqueness of Indo-US technology and talent flow connections and underlined that a knowledge economy with greater data sensitivity makes an even stronger case for collaboration. He pointed out that an innovation partnership is central to the future of Indo-US ties and policies must be accordingly supportive. Education is a special bond and both sides should work to expand it further, suggested Jaishankar.

The two exchanged views on the current global situation and its contemporary challenges, including stability and security in Asia, and how best that can be ensured. They also touched on the specific issues that will be taken up in the 2+2 tomorrow, said the sources.

Pompeo shared his government’s thinking on Afghanistan while Jaishankar highlighted India’s stakes and its continuing concern that decisions should be made by Afghans themselves without use of force.

He also made clear that cross-border terrorism was completely unacceptable, claimed the sources. Both Ministers also discussed multilateral consultations and cooperation in the context of India’s forthcoming UNSC membership.