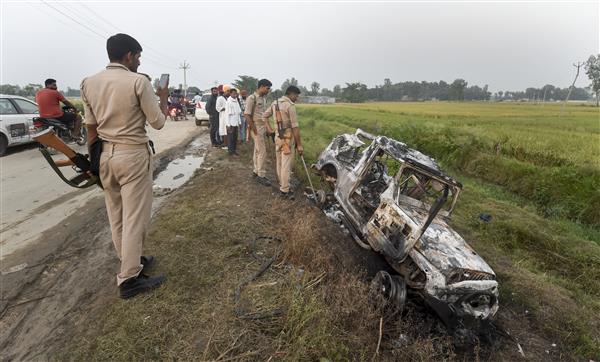 Four persons, including a local Lakhimpur Kheri-based BJP leader, were arrested on Monday in the October 3 case wherein eight persons were killed.

A police statement late on Monday night said that Sumit Jaiswal, Shishupal, Nandan Bisht and Satya Prakash Tripathi, all occupants of the SUVs that allegedly mowed down five people, including four farmers, have been arrested.

A licensed revolver and three bullets were recovered from Tripathi.

Jaiswal, seen in some viral videos escaping Mahindra Thar from the left front side on the day of the killings had earlier filed a complaint against protesters accusing them of lynching the Thar driver Hari Om and two other BJP workers to death.

A counter FIR (apart from the one registered by protesting farmers) was lodged on the complaint of Jaiswal.