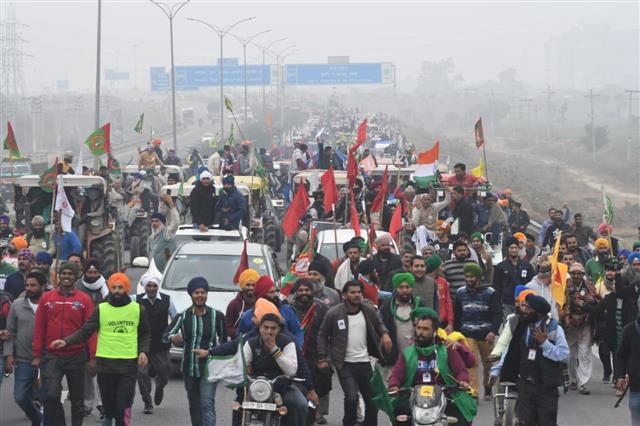 Farmers have been protesting the farm laws at Delhi borders.

The Ministry of Home Affairs on Tuesday ordered the temporary suspension of internet services around Delhi-NCR borders even as protesting farmers clashed with police at several places in the national capital.

The order stated that the move was in the "interest of maintaining public safety and averting public emergency".

The internet services have been suspended at Singhu, Tikri, Mukarba Chownk, Nangloi and adjoining areas. According to the order, the services will remain suspended till 11:59 pm on Tuesday.

Protesting farmers clashed with police at several places in the national capital and entered the iconic Red Fort and ITO in the heart of the city after hundreds of them deviated from pre-decided routes, prompting security personnel to resort to lathicharge and tear gas.

Chaotic scenes were witnessed at ITO, where hundreds of protesters could be seen chasing police personnel with sticks and ramming their tractors into the buses parked by police.

At the ITO, a bus was vandalised by angry farmers.

Police on Tuesday fired tear gas shells and lathicharged farmers when they clashed with the force in parts of city. Police used tear gas on groups of farmers and resorted to baton charge as protestors broke past barricades with tractors at different border points.--With PTI