Reaching out to the farmers, the PM says the Union Agriculture Minister is just a phone call away 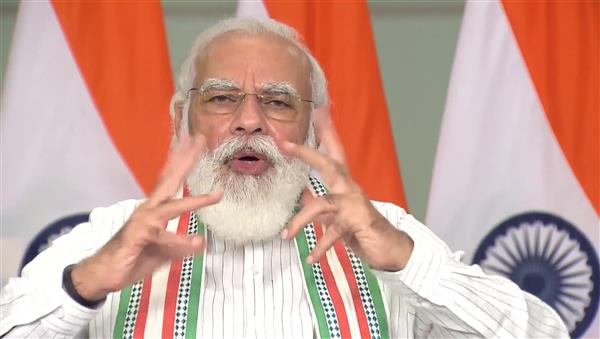 Prime Minister Narendra Modi on Saturday told the all-party meeting that the government’s last proposal to the agitating farmers to suspend the farm laws for one and a half years still stood and that the ongoing protests would be resolved only through dialogue.

Reaching out to the farmers, the PM said the Union Agriculture Minister is just a phone call away.

The Centre had asked the farmers to reconsider the proposal of suspension of the laws in the last round of talks.

Also read: Govt made a mistake by pushing farm laws, shouldn’t make another by implicating farm leaders: Azad to Modi

The Home Ministry, meanwhile, temporarily suspended Internet facilities at the Singhu, Tikri and Ghazipur borders, where the farmer crowds were still swelling.

During the All-Party meet PM @narendramodi assured that GOI is approaching the farmers issue with an open mind. PM said GoI’s stand is same as it was on 22nd- proposal by Agriculture Minister still stands. He reiterated what Tomar Ji said - that he is phone call away for talks.

The meeting saw heated interventions by some leaders, including TMC’s Sudip Bandopadhyay, who demanded repeal of farm laws to resolve the agitation.

Congress’s Ghulam Nabi Azad also spoke for farmers, flagged job losses and the issue of rights of people of Jammu and Kashmir.

The PM, however, signalled that while the government was willing to keep the laws in abeyance and tweak them to allay farmers’ concerns the government would not wholly repeal the laws which had “already benefited 10 crore small farmers”.

The government at the same time maintains that the laws are not in operation as the Supreme Court has stayed them and the government is committed to honouring the court order.