The NCPCR also asked the number and details of the children stranded, and subsequently rescued from the Red Fort 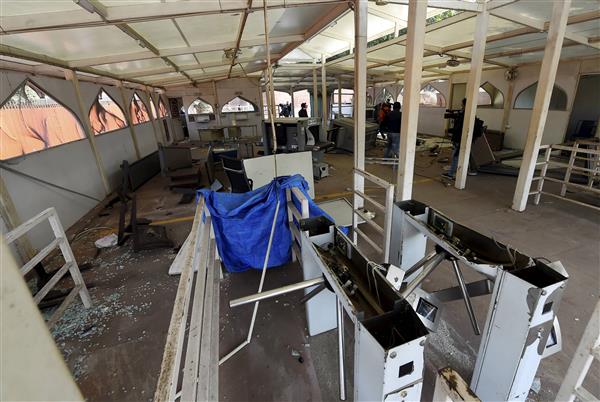 Damaged metal detectors at an entry gate in the premises of the Red Fort, a day after it was stormed by protesting farmers during their tractor march, in New Delhi on January 27, 2021. PTI

The country’s apex child rights body, the NCPCR, Wednesday sought a report from the Delhi Police after it emerged that over 250 children who had come here to participate in the Republic Day parade were stranded at the Red Fort as protesting farmers stormed the premises.

In a letter to DCP (North) Anto Alphonse, National Commission for Protection of Child Rights (NCPCR) chairperson Priyank Kanoongo also sought registration of an FIR against the persons responsible for the incident.

“You are further required to furnish a detailed Action Taken Report (ATR) inter alia the following along with the copy of FIR within 48 hours of date of issue of this letter,” Kanoongo said in his communication to the DCP.

The NCPCR also asked the number and details of the children stranded, and subsequently rescued from the Red Fort.

Over 250 artistes, including children, were rescued after they got stranded near the Red Fort on Tuesday as the farmer’s tractor parade stormed the Mughal era monument.

They were safely rescued by Delhi Police personnel after being stuck for almost two hours in the afternoon, provided refreshments and subsequently escorted away, a senior officer had said on Tuesday.

The tractor parade on Tuesday meant to highlight the demands of the farmer unions had descended into chaos on the streets of the national capital as hordes of rampaging protesters broke through barriers, fought with police, overturned vehicles and hoisted a religious flag from the rampart of Red Fort.

The entire area saw chaotic scenes for hours as the protesters pelted stones at police and damaged vehicles. Police personnel tried to control the mob by baton-charging them and lobbing tear gas shells. — PTI