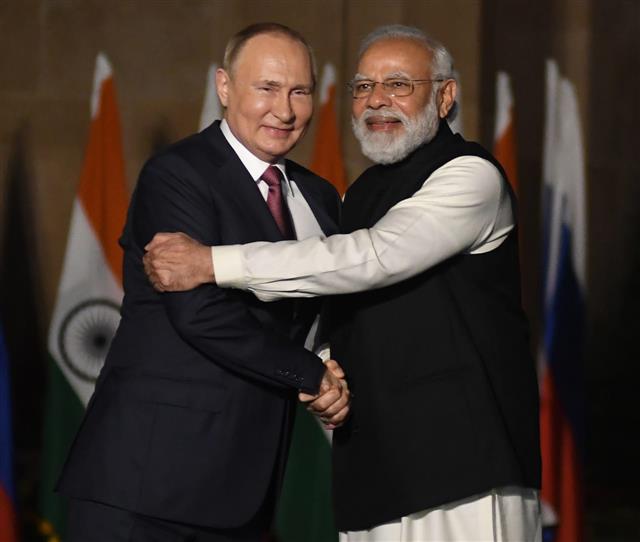 Russia President Vladimir Putin on Monday described India as a great power, a friendly nation and a time-tested friend and echoed common concerns over terrorism, drug trafficking and organised crime as he held wide-ranging talks with Prime Minister Narendra Modi.

Putin also expressed concern over the developments in Afghanistan and said India and Russia will continue to coordinate on major challenges facing the region.

“We perceive India as a great power, a friendly nation and a time-tested friend. The relations between our countries are growing and I am looking into the future,” Putin said in his initial comments.

Modi said Putin’s second visit abroad during the Covid-19 pandemic reflected his personal commitment to the India-Russia ties and that the special and privileged strategic partnership between the two sides was getting stronger.

Putin said both sides continue to cooperate on global issues and the positions of the two sides on many issues have similarities.

The Russian leader also referred to growing cooperation between India and Russia in areas of environment, trade and investment and high technology among others.

“Right now, the mutual investments stand at about 38 billion. More investments are coming from the Russian side,” Putin said.

The Russian leader said he was “so very happy to be able to visit the friendly country of India”.

In the last few decades, the world witnessed many fundamental changes and different kinds of geopolitical equations and variables, but the friendship of India and Russia remained constant, Modi said.

“Your visit to India is a reflection of your commitment to ties with India,” the prime minister said.

The summit talks took place hours after the foreign and defence ministers of the two countries held their inaugural ‘2+2’ dialogue with an aim to widen the ambit of discussions on strategically important issues.

Putin flew into India on a short visit for the summit.

The day began with Defence Minister Rajnath Singh’s talks with his Russian counterpart Sergey Shoygu under the framework of the India-Russia Inter-Governmental Commission on Military-Technical Cooperation.

At the end of the talks between the defence ministers, both sides inked an agreement for joint production of over six lakh AK-203 assault rifles at a manufacturing facility in Uttar Pradesh’s Amethi, besides firming up another pact on military cooperation for 10 years.

The rifles will be manufactured for the Indian armed forces at a cost of around Rs 5,000 crore.

The agreements were signed at the 20th meeting of the India-Russia Inter-Governmental Commission on Military and Military-Technical Cooperation (IRIGC-M&MTC). —PTI