Experts feel the four-member committee needs to be reconstituted 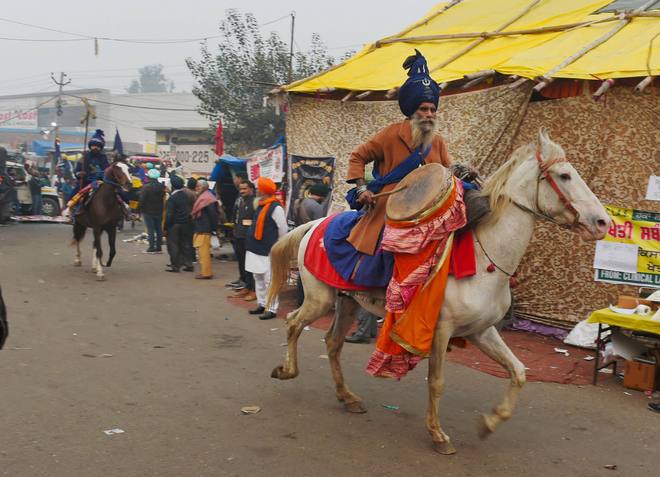 Nihangs during farmers’ agitation in New Delhi on Friday. PTI

The Supreme Court’s four-member committee on farmers’ agitation appears to be in limbo after the lone farmers’ representative and Bharatiya Kisan Union national president Bhupinder Singh Mann recused himself in view of criticism from his own union which sacked him from its primary membership.

Legal experts told The Tribune that the panel can’t start its work until it was reconstituted and the vacancy filled.

“The SC will have to nominate some other person to the committee. Since setting up of the committee is a unilateral action on part of the court, only it can find a replacement for Mann,” senior counsel Vikas Singh, who is appearing a PIL petitioner seeking guidelines on agitations, said.

Advocate Virag Gupta said, “The SC may modify its previous order and allow the committee to continue with only three members or name Mann’s replacement. Since kisan unions have expressed their willingness to continue talks with the government it may keep its order on hold or even refer it to a Constitution Bench.”

While staying the implementation of the three farm laws, a three-judge Bench headed by Chief Justice of India SA Bobde had on January 12 set up a four-member committee to hear stakeholders’ views.

They were mandated to talk to the agitating farmers on the Farmers (Empowerment & Protection) Agreement of Price Assurance & Farm Services Act 2020, Farmers Produce Trade & Commerce (Promotion & Facilitation) Act & Amendment to Essential Commodities Act and file a report before the court in two months.

Advocate AP Singh, who is representing some farmers’ bodies in the case, said, “it was bound to happen as most of the members were pro-farm laws and their views were already known”.