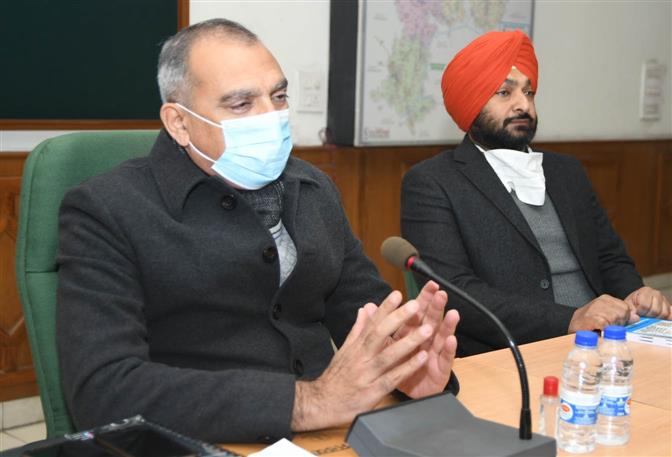 Deputy Commissioner-cum-District Election Officer Sandeep Hans today said the district administration would conduct the Assembly poll in a free and fair manner with complete transparency. He elaborated on the provisions being made in the wake of Covid-19 spread.

During a press conference in the city, he said the Covid-19 protocol would be followed in the poll to ensure safety of the public. He said the district administration would ensure strict enforcement of the model code of conduct and all poll-related complaints would be resolved at the earliest. Additional Deputy Commissioner (General) Gurpreet Singh Thind was also present on the occasion.

Sandeep Hans said more than 12,000 officials had been deployed on polling duties and arrangements had been made to adequately train them for elections. He said the entire polling staff had also been fully vaccinated.

The District Election Officer said the prospective candidates and political parties had been advised to refrain from paid news as such a trend was harmful for democratic process as per the Supreme Court and the Election Commission of India. He appealed to the media to refrain from paid news circulation as the Media Certification and Monitoring Committee had been formed to monitor the news and advertisements given by contesting candidates and their supporters in the newspapers, social media accounts and all across electronic media.

Sandeep Hans said the district police were deployed to maintain peace in the district and it had set up inter-district and inter-state barriers for surveillance. Two companies of the ITBP and one company of the SF have reached Patiala and other required forces will be deployed soon. He said that orders regarding deposition of licensed arms of the general public were already in place.

General public can register violation of model code of conduct complaints on helpline number 1950 and on the e-vigil app, the DC said. —