Strict action to be taken against all such illegal activities: Mayor 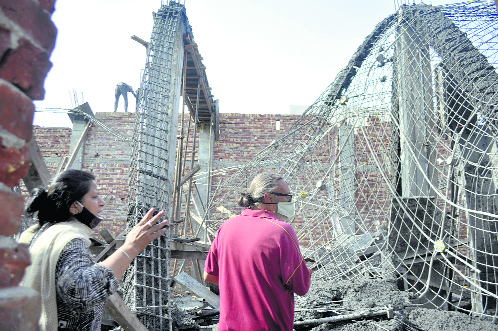 Debris of the illegal under-construction building, which collapsed in Patiala. file

The MC has covered various nullahs (drains) in the city adjacent the office of the Languages Department, the Nabha Gate area, the Ragho Majra area and the Sanouri Adda area among others to make more space for vehicles and remove stink.

Though roads were widened for commuters and other purposes, many shops had already come up over them illegally under the very nose of the MC.

Shops have come up adjacent drain at Sanouri Adda. The MC had issued orders for the demolition of shops, but no action was taken against such illegal constructions. Another shop is under construction in the same area while the civic body has turned a blind eye towards the illegal activity.

Earlier, an under-construction building collapsed in the same area over a fortnight ago after the Corporation issued orders for its demolition. While giving assurance Corporation officials today said illegal constructions would be razed. “The debris will be considered as evidence by the Police Department to register an FIR,” they added.

The ATP, Manoj Kumar, said, “The MC will take action in a few days.”

Meanwhile, Mayor Sanjeev Kumar Sharma said, “The decision has been taken to prevent any misuse of the government land in future.”