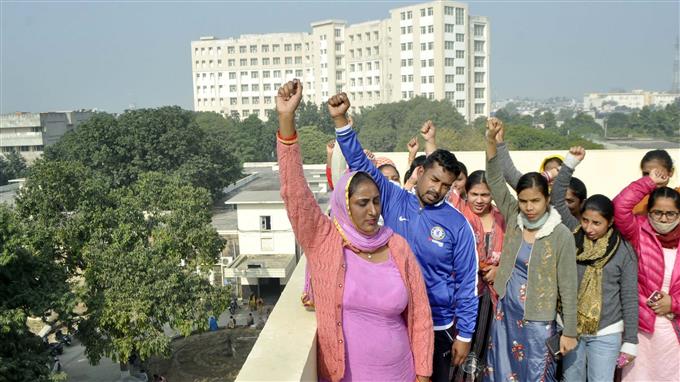 Amid indefinite strike by outsourced employees of labs, the Covid testing at VRDL lab of Government Medical College here has been severely affected.

The pendency of tests at the lab, owing to the indefinite strike by lab staff, has risen to around 7,000 Covid samples. In the face of a shortage of staff, the lab is said to have already stopped accepting the samples for the time being. The genome sequencing of positive Covid samples amid the fear of new Covid-19 strain, Omicron has also been paralysed.

The employees, around 90 in number, went on strike on Saturday demanding their absorption into the department of Medical Education. Notably, the lab employees are currently working as outsourced employees. Though, the Health Department has deployed their own couple of lab technicians to help in the Covid testing, the lab still is facing the acute shortage. A senior official of the lab said, “We are unable to test Covid samples in the absence of sufficient staff. The government should immediately step in as the fear of new variants is growing day by day.”

Meanwhile, officials of the Health Department said that around 172 international travellers had landed in the district last month. Of 172, around 117 had already been traced and tested. The remaining travellers could not be traced allegedly due to incorrect information provided by them. “Some gave wrong addresses while some claimed that they are not here in the district and already left the place ,” said the health officer. Meanwhile, it has been learnt that in December around 42 international travellers from 11 high-risk countries have reached the district and have been put under home quarantine while they would be tested on 7th day of their arrival.