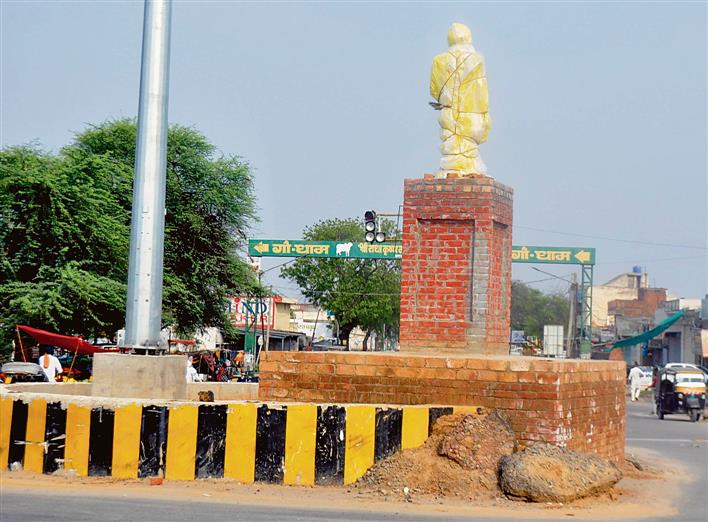 City residents have alleged there is politics behind installation of statue after another statue at Bari Nadi on the Patiala-Sanaur road here. Sanaur Chowk will now be renamed Shaheed Udham Singh Chowk after widening and completion of work.

“The statue has been installed on demand of the general public and the Kamboj community. Harinder Pal Singh Harry Mann had assured people last year that the chowk will be widened and the statue will be installed here.”

“The work is being carried out in collaboration with Congress leaders, contributions from the general public and help from the Public Works Department (PWD) and the Municipal Corporation,” he added.

“An amount of Rs9 lakh is being spent on the installation of statue. Congress leaders in the area and the Kamboj community have contributed Rs6 lakh. The remaining amount will be sourced through public contributions. The marble statue weighs 11 kg,” he said.

“The statue will be unveiled by Member Parliament Preneet Kaur on July 31, observed as Udham Singh’s martyrdom day,” he added.

Raminder Shah, an area resident, said, “These noble souls are urging people not to waste money on their statues and rather starting a healthcare facility with this amount. Their name on a hospital will give them more respect than a statue.”

When questioned about comments of the public on politics, Harinder Pal Singh Harry Mann said, “There is no politics involved in installation of statue. The development is solely because of years’ long pending demands of residents. We had sought permission from the MC and the PWD in this regard, which was granted.”