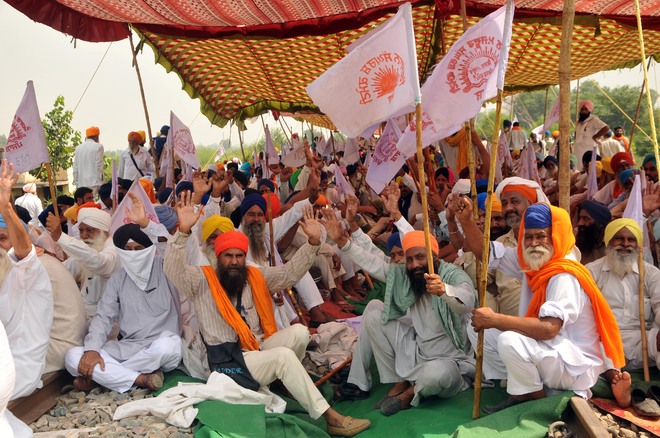 Farmers block a track during a ‘rail roko’ agitation at Devi Dass Pura village, near Amritsar; and protesters stage a sit-in on the rail track in Nabha on Thursday. Photos: vishal kumar & Rajesh Sachar

Farmers under the banner of the BKU Ekta Ugrahan started a three-day ‘rail roko’ protest by blocking railway tracks on the Bathinda-Delhi railway line in Mansa on Thursday.

The protesters raised slogans against the Union Government and SAD for allegedly failing to protect rights of the farming community.

Addressing the gathering, BKU Ekta Ugrahan president Ram Singh Bhaini Bagha said, “By bringing in farm Bills that will benefit corporate players in the country, the SAD-BJP has paved the way for irreparable damage to the farming community. As per new Bills, MSP of all crops will be abolished. The basic structure of mandi board will be altered completely and procurement by government agencies will not take place. There will be private players who will procure farm produce as per their own convenience and rates fixed by them.”

They said the ‘rail roko’ move called by the Kisan Mazdoor Sangharsh Committee was indicative of just how far they had been pushed without dialogue amid the pandemic.

Keeping it in view, the Ferozepur Railway Division has cancelled 14 trains affecting the state’s connectivity with Mumbai and Nanded with Maharashtra, Kolkata and New Jalpaiguri in West Bengal, Jayanagar in Bihar and Haridwar in Uttar Pradesh.

Kisan Mazdoor Sangharsh Committee state general secretary Sarwan Singh Pandher said, “This is purely an agitation of farmers and their families. No sitting or former MLA, MPs or ministers will be welcomed in our fight. We will keep fighting no matter how long it will take.”

He questioned the integrity of SAD leadership which he said had yet to clarify its stance over the ordinances.

“Why didn’t former Union Minister Harsimrat Badal and SAD president Sukhbir Badal contest when these ordinances came across them before being tabled in Parliament?” he asked.

In Ludhiana, passengers are on the receiving end with the rail traffic going off the tracks in the region for at least four days due to the ongoing ‘rail roko’ agitation by farmers. The Railways have announced cancellation of two pairs of trains from today to Saturday, while 10 other pairs of trains would short-terminate and short-originate during this period.