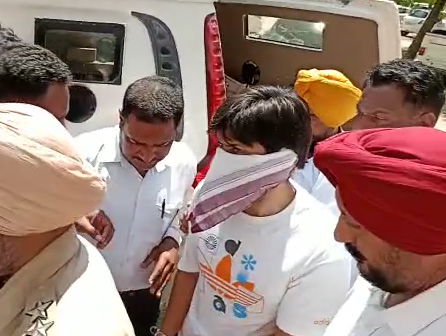 A video grab of Lawrence Bishnoi in custody.

The Moga police on Wednesday handed over the custody of gangster Lawrence Bishnoi to the Faridkot police.

The Faridkot police had demanded his custody from a local court to investigate a case against him at Kotkapura in Faridkot district.

The Moga police had arrested Bishnoi and brought him on a production/transit warrant at Moga on August 1 and obtained a 10-day remand from a court to investigate an attempt-to-murder case.

On Wednesday, the police remand ended and the Moga police did not seek its further extension. The Faridkot police filed an application before a local court seeking transit remand to take Bishnoi to Kotkapura police station.

Cloth merchant Sumit Kumar of Shastri Market, Kotkapura, had reported to the local police in July last year that he had got a call from gangster Goldy Brar from Canada. He had claimed that Brar demanded Rs 50 lakh from him as ransom and mentioned that he belonged to the Bishnoi gang. Brar had sent messages to Sumit threatening to kill him and his family, according to his statement.

The Kotkapura police had registered a case against Brar, Bishnoi and two others.

“Bishnoi will be interrogated in the case registered at Kotkapura police station,” a Faridkot police official said, adding that he would be produced before a local court in Faridkot later in the day to seek his custody.

Moga SSP Gulneet Singh Khurana said, "We have now sought the custody of another dreaded gangster Jaggu Bhagwanpuria whose name has cropped up during Lawrence Bishnoi's interrogation in a murder bid case," he said.