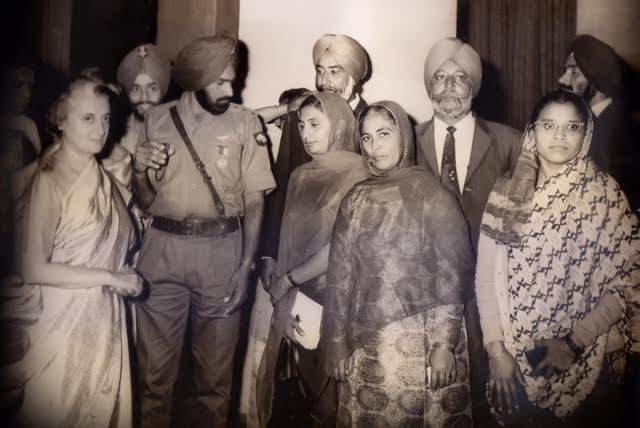 Col HS Kahlon, along with his family members, with then PM Indira Gandhi after he received the Vir Chakra. - File Photo

It was on December 3, 1971, when Pakistan launched a series of airstrikes against Indian airbases and the war ended in the formation of Bangladesh. Fifty years later, war heroes relive their valour and glory as they went down the memory lane and share their courageous deeds.

I am grateful to the people I have met throughout my life. One such person is Gun Position Officer Gurmail Singh, who fractured his arm and was asked to rest. But he was so determined to go to war that he joined us with a plaster on his arm. Col HS Kahlon (retd), war veteran

Ludhiana-based Col HS Kahlon (retd) was decorated with Vir Chakra for his bravery during the war. What Colonel Kahlon has earned is loyalty during his life.

Sharing an episode from the war, he said: “On December 3 and 4, Pakistani soldiers attacked us seven times with the aim of entering Amritsar through Ranian as security and defence at the Attari-Wagah border was tight, but were unsuccessful.” To prevent another attack on December 8, Colonel Kahlon, then a Captain deployed in Ranian (near Amritsar) on the western border, suggested neutralising the leading tank. As a result, the tanks coming behind retreated.

In the Army for just four and a half years, Major Inderjit Singh Sandhu (retd) considers himself lucky to be a part of the war. “What still haunts me is that some of our fellow officers didn’t even get wood for their last rites, but that is the sad truth of war and one has to be strong enough to stomach it.... Fifty years have passed, but the images still flash before my eyes as if it was yesterday,” recalls Major Sandhu.

Major BS Gill (retd), however, didn’t fight in the war but got closely acquainted with its after-effects. He was posted in Sikkim where the war clouds were already gathering but after it ended, he was sent to Madhya Pradesh.

“I was appointed as the Commandant of the Prisoner of War (PoW) camp No. 52. There were 3,000 PoWs who were let off after two and a half years. I remember Capt Asgar Ali, a doctor with the Pakistan army, who requested me to send him in the first or second train otherwise he would miss getting admission to his course. I accepted his request after which he said he owed his career to me,” reminisces Major Gill.

Recalling the day when the PoWs came to meet him, Major Gill says: “I thought they all must be having some complaints or grudges but they were all praise for the Indian soldiers.”