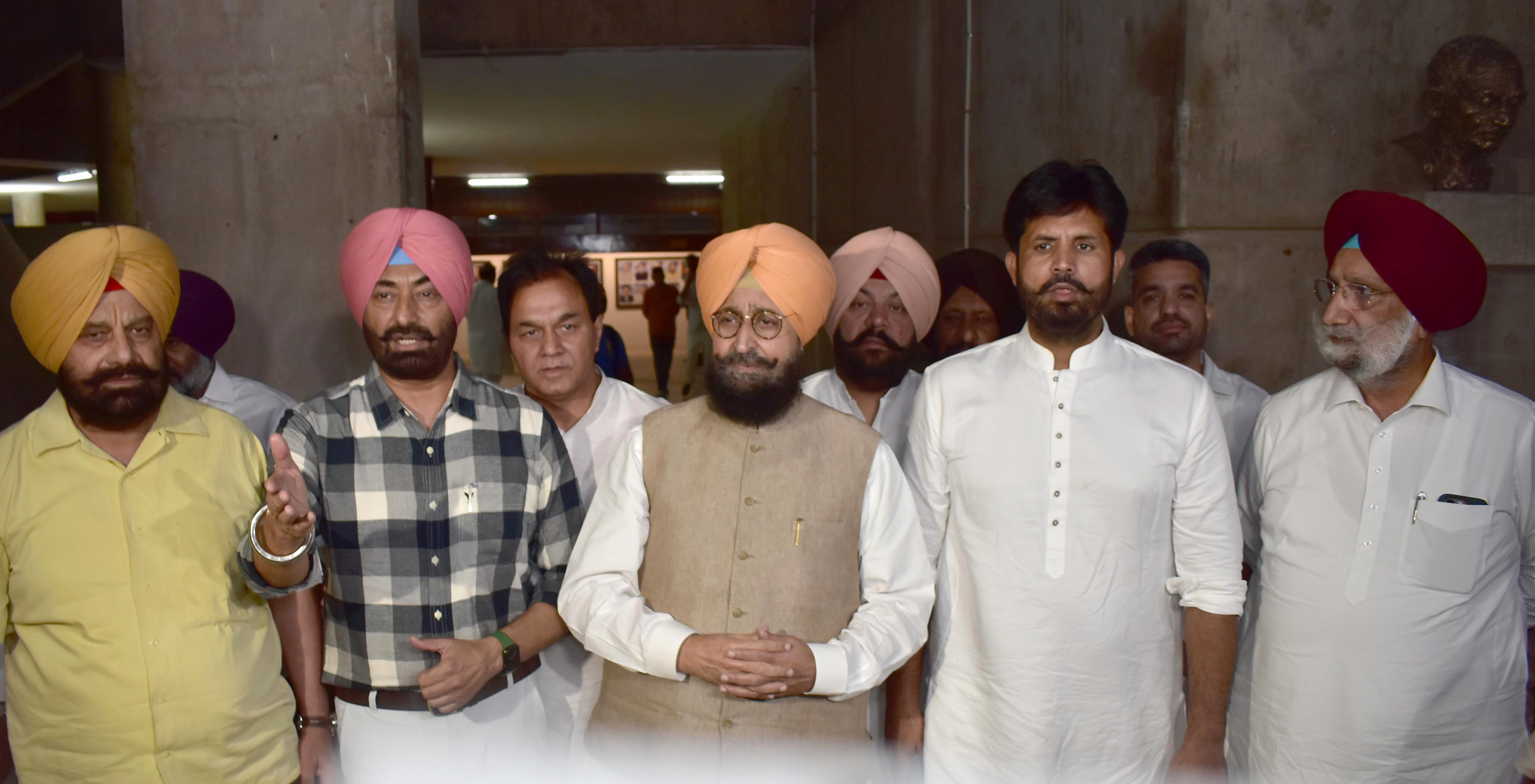 Congress leaders interact with mediapersons outside the Vidhan Sabha on Friday. Pradeep Tewari

The murder of singer Sidhu Moosewala, extortion calls by gangsters and the resultant fear among people in Punjab dominated the proceedings of the debate on Governor’s Address on the first day of the Budget Session of Punjab Vidhan Sabha.

It was only after a walkout by the Congress that the issue was finally discussed. Interestingly, the two BJP MLAs too staged a walkout with the Congress, demanding that the government discuss the law and order situation. Though the three Akali MLAs and lone BSP member protested alongside the Congress MLAs in the well of the House, they did not stage a walkout.

Together, the Opposition MLAs stalled the proceedings for 25 minutes, demanding a debate, ruing the adjournment motion moved by the Congress on law and order was not being taken up.

Leader of the Opposition Partap Singh Bajwa mocked the reason for turning down the motion on the grounds that the matter was “sub judice”. He said though the main conspirator of Moosewala’s murder was lodged in the Tihar Jail, which was under the control of the AAP government in Delhi, he was using a mobile phone while being in solitary confinement.

“A person arrested by the Delhi Police warned of an attempt to assassinate Moosewala, but your government ignored the input and instead reduced his security. Then the security withdrawal was advertised on the party’s social media, which encouraged the assassins to kill the singer,” he rued, adding many people were getting extortion calls and were forced to pay up, even as the police were busy “harassing” Opposition leaders.

As the Treasury benches and Speaker Kultar Singh Sandhwan remained unrelenting on allowing the motion, the Congress MLAs accused the government of being unable to take the bull by the horns in dealing with criminals.

The government defence was led mostly by Sunam MLA Aman Arora, as CM Mann left the House after the walkout. Arora said within three months of assuming the reins of the state, they had managed to wipe out “the dirt” accumulated in the past 70 years, and they would continue to act strictly against the criminals.

How can the matter be ignored, considering CM Mann is himself saying he faces threat to life? If the CM feels unsafe, you can well imagine the plight of the common man. That is why a debate is important. — Partap Singh Bajwa, LoP

Will probe all cases

The crime graph during previous governments’ tenure was much higher. When we say matter is sub judice, we are referring to unsolved cases… we will investigate these and bring these to logical conclusion. — Aman Arora, Sunam MLA

Citing figures from the National Crime Records Bureau, he said: “The crime graph during the tenure of previous governments was much higher. When we say the matter is sub judice, we are referring to the unsolved cases languishing in courts, such as Bargari case, Gagneja murder, Mata Chand Kaur murder, Maur blasts and drug cases. Your own former Deputy Chief Minister (pointing to Sukhjinder Randhawa) has gone on record saying former CM Capt Amarinder Singh purposely stalled the Maur blast investigation. But we will investigate all these cases and bring these to logical conclusion,” he said.

Earlier, when the proceedings began, soon after the Question Hour, the Opposition MLAs rued the duration of the session was very shortto discuss all issues concerning Punjab. The Speaker, however, said the number of sittings were more than the previous sessions.