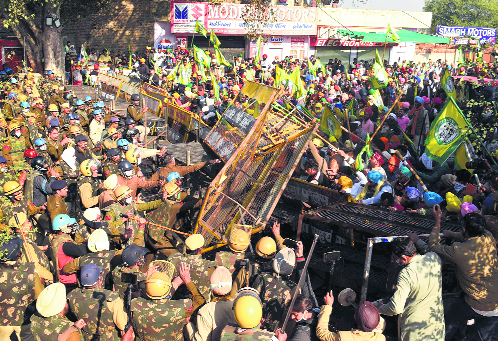 Punjab-based farmers' body Kisan Mazdoor Sangharsh Committee (KMSC) on Tuesday refused to participate in a meeting called by the Centre over the farm laws, demanding that representatives of all farmer unions be invited for talks.

Agriculture Minister Narendra Singh Tomar on Monday had invited leaders of farmer unions for talks on Tuesday, instead of December 3, citing the COVID-19 pandemic and cold.

Thousands of farmers stayed put at various Delhi border points for the sixth consecutive day on Tuesday protesting against the new agri laws, which they fear will dismantle the minimum support price system and corporatise farming.

KMSC is one of the 32 Punjab farmers' bodies invited for talks with the Centre.

"A committee of several farmers' bodies has not been invited, and moreover, the prime minister is not holding this meeting. Because of these reasons, KMSC is not going to attend the meeting," KMSC general secretary Sarwan Singh Pandher said.

Pandher accused the government of trying to divide the protesting farmers by not inviting all the farmer unions.

"If 32 Punjab-based farmers' bodies have been invited, a committee representing around 500 farmers' organisations is also there which should have also been invited," he said.

"By not inviting all farmers’ bodies, an attempt is being made to divide the farmer organisations. If we attend the meeting, it will be presumed that this agitation (against farm laws) is only taking place in Punjab, which could be the conspiracy of the Centre," he claimed.

Reacting to Prime Minister Narendra Modi's statement that these farm laws are in the interest of the farming community, Pandher said, "He (the PM) has already given his decision before the meeting. And now, no minister can go against the PM." PTI