Sells at Rs 23 to 26 per cubic ft in Faridkot despite being fixed at Rs 5.5 by state two weeks ago 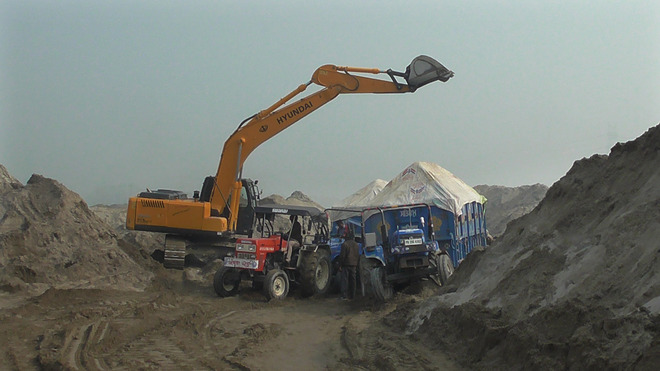 A machine excavates sand along the Sutlej. file photo

Two weeks after the state government announced providing sand and gravel at Rs 5.50 per cubic feet at mining sites, it is being sold between Rs 23 and Rs 26 per cubic feet in retail markets of the area.

Due to the inflated rates of diesel, the transportation charges of sand from the pithead to the retail market are quite high. —Lovepreet Singh, ASSt Dist Mining officer

Though the state government is making high-pitched claims of ending sand mafia and has installed big posters and banners on roadsides highlighting this claim, there is no relief to those constructing houses. Before the government announced capping of sand prices at Rs 5.50 per cubic feet, it was being sold between Rs 26 and Rs 28 per cubic feet.

Lovepreet Singh, assistant district mining officer, said the high rate of sand in the retail market was due to high transportation charges from the mining sites to the dealers. The Rs 5.50 per cubic feet rate is fixed at the sand pihead and includes loading charges, he said. But due to the inflated rates of diesel, the transportation charges of sand from the pithead to the retail market were quite high, he said.

The retail dealers in Faridkot said they were getting sand at Rs 18 to Rs 20 per cubic feet from the suppliers and transporters and further selling it between Rs 23 and Rs 26 to the customers in retail. While the state government is highly vocal about capping the sand rates at the mining sites, there is no word about the highly inflated transportation charges.

Though the government in its policy on November 10 announced that a consumer was free to take his own transport, these vehicles are not allowed at mining sites. “It is the transport mafia in place of sand mafia now, and there is no relief to the end user, the high claims of the state government notwithstanding,” claimed retail dealers of sand and gravel in Faridkot, preferring anonymity.

As a cartel of transporters, having political lineage, is supplying the sand among the retailers, in reality no consumer or retailer is allowed to use his private vehicle for transportation from the pitheads, the retailers claimed.