Girl gets CFI recognition after cycling from Gurugram to Bihar 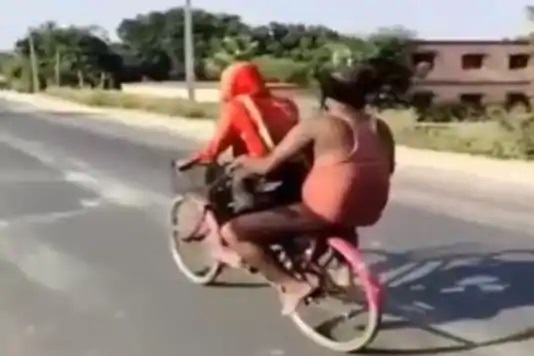 A video grab shows Jyoti Kumari cycling her way to Bihar from Gurugram along with her father. She left Gurugram on May 10 and reached her village on May 16. Twitter

In what could be a life-changing opportunity, the cycling federation will invite 15-year-old Jyoti Kumari, who pedalled her way to Bihar from Gurugram carrying her ailing father, to appear for a trial next month.

Stuck in Gurugram due to nation-wide lockdown, a tenacious Jyoti asked her father to sit on the rear side carrier of her cycle and took him to his native place, covering 1200 km in seven days.

Cycling Federation of India chairman Onkar Singh said if Jyoti, a Class VIII student, passed the trial, she would be selected as a trainee at the state-of-the-art National Cycling Academy at the IGI Stadium complex in New Delhi.

The academy, under the aegis of the Sports Authority of India, is one of the most advanced facilities in Asia and has the recognition of the UCI, the world body of the sport.

"We spoke to the girl this morning and we have told her that she would be called to Delhi next month as soon as the lockdown was lifted. All the expenses of her travel, lodging and other facilities will be borne by us,” said Onkar Singh.

"If she needs to accompany somebody from home, we will also allow that. We will see in consultation with our Bihar state unit on how she can be brought to Delhi for a trial," he added.

Asked about the rationale behind offering trial to the youngster, Singh said, "She must have something in her. I think cycling down more than 1200km is not a mean job. She must be having the strength and physical endurance. We want to test it."

"We will make her sit on the computerised cycle at the academy and see if she satisfies the seven or eight parameters to get selected. After that she can be among the trainees and she will not have to spend anything," Onkar Singh added.

He also said the CFI always tries to find out talent for grooming. "We have nearly 10 cyclists in the age group of 14-15 in the academy. So we want to nurture young talent."

Jyoti's father, Mohan Paswan, an auto-rickshaw driver in Gurgaon got injured and the lockdown left him without any source of income. He had to return the auto-rickshaw to the owner.

The father and daughter duo started their journey from Gurgaon on May 10 after buying a cycle with whatever money they had and reached their village on May 16. PTI