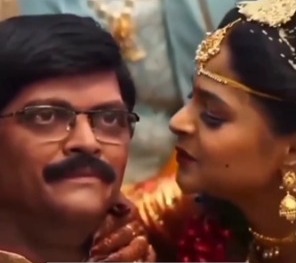 A daughter always wants her marriage farewell to be done by her father. It is utmost painful for a daughter to depart from her family in her marriage without seeking blessings of her father, in case latter had left for heavenly abode. Imagine the feeling of a girl if she gets to feel the presence of her father despite him not being present in flesh.

A heart-warming video is doing the rounds on social media where a bride was surprised when she was made to witness the presence of her father through a wax statue of his. The statue, in the sitting posture was brought towards the bride on wheel chair.

The bride soon after getting the glimpse of her father at once couldn’t figure out if it was for real or imitation. She couldn’t control her emotional outburst and a stream of tears emerged from her eyes right away. Even bystanders got surprised and many of them too couldn’t resist weeping.

The girl later collects herself and smiles cheerfully, observing her father’s presence in her wedding. She even embraces and kisses the statue.