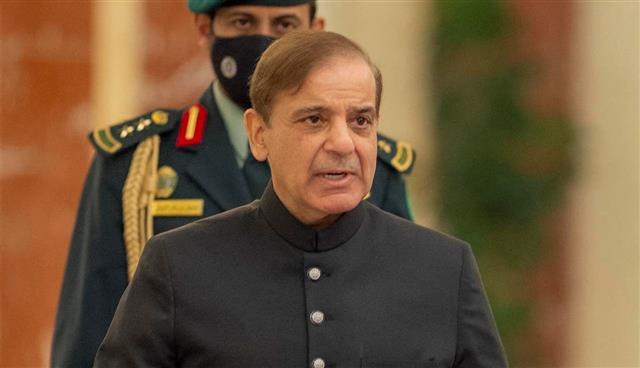 Pakistan Prime Minister Shehbaz Sharif has expressed his desire for peaceful relations with India based on the principles of “equity, justice and mutual respect” and the resolution of the Kashmir issue, according to a media report on Friday.

Sharif also urged the international community to play a “facilitative role” to ensure durable peace and stability in South Asia, it said, amidst a chill in Indo-Pak bilateral ties over the Kashmir issue and cross border terrorism emanating from Pakistan.

Sharif expressed these views during a meeting with the newly-appointed Australian High Comm­issioner to Pakistan, Neil Hawkins, on Thursday, the Dawn Newspaper quoted the Prime Minister's Office (PMO) as saying.

“Pakistan desires peaceful ties with India, based on the principles of equity, justice and mutual respect. In this context, a just and peaceful resolution of the Jammu and Kashmir dispute in accordance with the relevant UNSC resolutions and the wishes of the Kashmiri people, was indispensable,” Sharif said.

“The international community has to play a facilitative role in this regard, as it was essential for durable peace and stability in South Asia,” he said.

Sharif's remarks came days after India decided to allow non-locals who are living ordinarily in Jammu and Kashmir to be able to register their names in the voting list and cast their ballot in the elections in the union territory.

Before the abrogation of Article 370, only the permanent residents of Jammu and Kashmir as defined by the state subject law were entitled to get voting rights.

In a related development, the Foreign Office on Friday said it categorically rejects India's announcement of permitting even temporary residents, including outside workforce and security personnel, to register as ‘voters' in Jammu and Kashmir.

It is an “Indian design to influence the outcome of ‘so-called' elections” in Jammu and Kashmir and deliberate attempts “of pre-poll rigging and overt manipulation”, the Pakistan Foreign Office said in a statement.

It also asked the international community to take immediate cognisance of the Indian attempts at effecting “illegal demographic changes” in Kashmir.

Jammu and Kashmir Chief Electoral Officer Hirdesh Kumar on Wednesday had announced that the Union Territory is likely to get around 25 lakh additional voters, including outsiders, after the special summary revision of electoral rolls being held for the first time after the abrogation of Article 370.

The bilateral ties between the two neighbours deteriorated further after India announced withdrawing the special powers of Jammu and Kashmir and bifurcation of the state into two union territories in August 2019.

India has repeatedly told Pakistan that Jammu and Kashmir “was, is and shall forever” remain an integral part of the country. It also advised Pakistan to accept the reality and stop all anti-India propaganda.