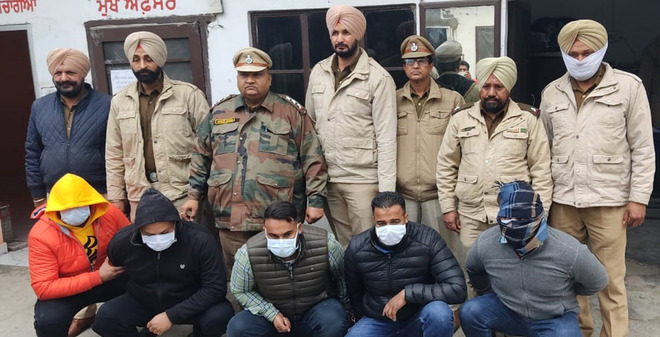 The police have nabbed notorious gangster Ranjodh Singh, alias Sunny Yama, along with his four accomplices on Saturday. The police have also recovered a brand new MPV (Innova Crysta) and a revolver from his possession. The accused were produced before the Duty Magistrate, who remanded him into police custody.

Other occupants of the vehicle have been identified as Taljit Singh, alias Jimmy, and Chanpreet Singh of Sudarshan Nagar, Narinder Singh of Ghanupur Kale and Gurpreet Singh of East Mohan Nagar.

Vallah police station SHO Sanjiv Kumar said the accused could not produce any documents related to the weapon and vehicle in which they were travelling.

According to police, a team headed by Assistant Sub-Inspector Prem Singh laid a naka near Vallah bus stop.

The ASI said they got a tip-off that occupants of a vehicle heading towards Verka Chowk were carrying weapons.

He said on being stopped, driver of the MPV first slowed down the vehicle and then suddenly stepped up acceleration. The ASI pushed barricades ahead of the vehicle and arrested its occupants.

The vehicle was being driven by Yama, a resident of Fairland colony, on Fatehgarh Churian road. Yama has around 12 criminal cases registered against him.

The police recovered .32 bore revolver and seven live bullets from his possession. Cops also recovered 20 live cartridges from the possession of Narinder. Investigations revealed that they had procured the weapon from Sukhpreet Singh of Khandwala, who also has a couple of criminal cases registered against him. The ASI said they have registered a case under Sections 25, 54 and 59 of the Arms Act.

A youth was allegedly kidnapped and assaulted on January 13. The victim has been identified as Gurjit Singh, a resident of Kotli Amb village, falling under the jurisdiction of Ajnala police station.

The accused have been identified as Major Singh, Hardeep Singh and Sandeep Singh of Kotli Amb village and an unknown person.

Gurpal Singh, cousin of the victim, stated to the police that on January 13 he and Gurjit were returning to their native village from Ajnala on separate motorcycles.

He said Gurjit stopped near the village to answer the call of nature and a car stopped near him. Gurpal said before they could understand anything, the accused started assaulting Gurjit. He said they bundled Gurjit in the car and sped away towards Harad Khurd village.

He said he immediately called Gurjit’s father Harpal Singh and started looking for his cousin. Gurpal said they found Gurjit in unconscious state on the roadside around 1 km away. He said they immediately rushed him to the Ajnala Civil Hospital.