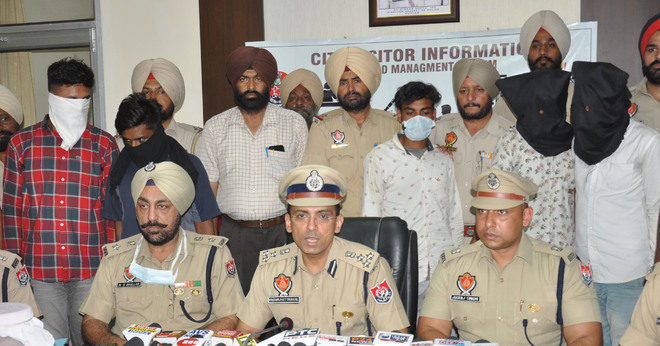 The police have nabbed two snatchers who were involved in robbing as many as seven grocery shops in the last four days. The accused have been identified as Prince, a resident of Sultanwind Road, New Azad Nagar, and Amandeep Singh of Bagh Ramanand.

Cops recovered a country-made weapon (.315 bore) along with two live cartridges and three snatched mobile phones, Rs 9,100 and a motorcycle from their possession.

Police Commissioner Vikram Jeet Duggal said the accused were drug addicts. We got a tip-off, following which an operation was launched.

“The accused used to work as truck drivers. We are ascertaining the source of weapon and trying to identify the person who provided the same to them,” said Duggal and added that the duo also confessed to have robbed a shop in Tarn Taran. He said owners of grocery stores were being asked to install CCTV cameras, which would help in detecting miscreants.

Meanwhile, the police have arrested two vehicle lifters— Kuldeep Singh of Jindra colony and Karanbir Singh of Subhash colony—and recovered four stolen bikes from their possession. Their kingpin, Prince of Sant Nagar, was still absconding and raids were on to nab him.

Another snatcher, Raju alias Gora of Pandori village, has been nabbed for snatching a mobile phone from a youth in Banke Bihari Gali on Batala Road on September 16. His accomplice Ravi was still on the run.

Sept 9: Mobile phone snatched from a girl in Maqboolpura