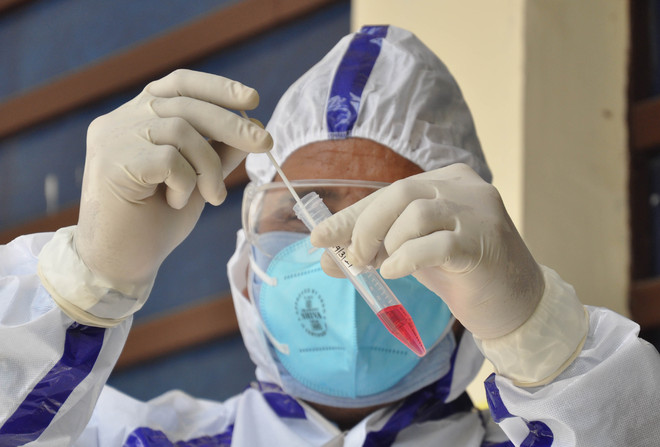 With one positive case reported on Tuesday, the district tally of Covid-19 patients increased to 47,332.

Amritsar: With one positive case reported on Tuesday, the district tally of Covid-19 patients increased to 47,332. The district Health Department has also reported recovery of two patients with which the total recovery count reached 45,734. The district, at present, has a total of three active cases. Meanwhile, a total of 4,920 residents were inoculated during the ongoing vaccination drive on Tuesday. Of these, 2,983 received the first dose of the vaccine, while 1,983 received the second dose. TNS

One arrested with pistol

Tarn Taran: Kacha Pakka police on Monday arrested Gagandeep, alias Charanjit, a resident of Chabal township, with a country-made 32 bore pistol and 16 live cartridges near Kacha Pakka village here. ASI Harjinder Singh said the accused was in a car (PB-02 AE-5600) when he was signalled to stop by a police party. The policemen searched the car and recovered the country-made pistol and the cartridges from it. The police have registered a case under Sections 25, 54 and 59 of the Arms Act against the accused. OC

Tarn Taran: Amarjit Singh, a resident of Warring village, has been accused of molesting a widow of the same village, when she was on her way back from the village gurdwara. The incident occurred two weeks ago but the Chohla Sahib police registered a case on Monday. Victim Amarjit Kaur in her complaint to the police alleged that the accused, who used to chase her often, appeared at the spot on September 29 when she was on her way back home after paying obeisance at the village gurdwara. The accused attacked her and even molested her and tore her clothes, the victim alleged. Sub-Inspector Sumanpreet Kaur, Investigating Officer, recorded the victim’s statement. The police officer said a case under Sections 323, 354-A, 354-B and 354-D of the IPC was registered. OC