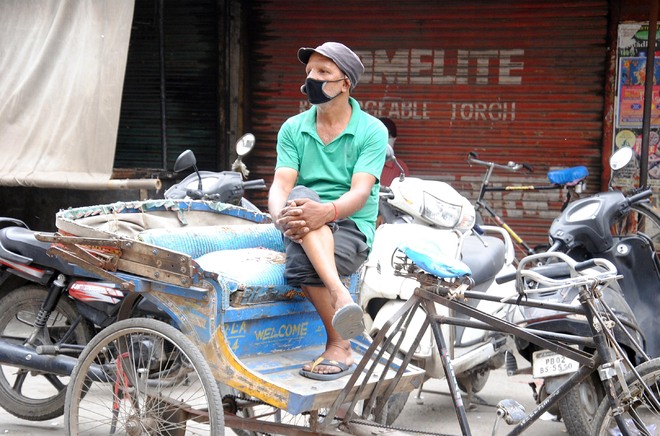 The nationwide lockdown has adversely affected rickshaw pullers, who are struggling hard to make both ends meet. Rajinder Kumar (45) says he has taken the rickshaw on rent. However, amid fears, people were avoiding venturing out, although major relaxations were given in lockdown 4.0.

“It has become difficult to arrange even two meals a day. We have no customers. All those coming out in the market have either car or two-wheeler,” he said.

He says amid the scorching heat, they wait for customers and return home with a meagre earning. “It is difficult to pedal a rickshaw in this scorching heat. These days we are taking home only Rs 100 or Rs 120 every day, which is not enough,” he adds.

He says he has three children and wife at home, and this small earning is not enough to meet the daily necessities.

“I pay Rs 30 as rent per day for the rickshaw, which comes out to be Rs 900 per month. It is better to switch to some other work. I did receive free ration supply twice, but it was not enough to support a family of five,” he rued.

His two sons aged 16 and 14 had been working at a printing press and a furniture shop to support the family. His third son is a student of class III. He recalled that he used to earn nearly Rs 400 a day before the lockdown was imposed.

“Panic-stricken people are not coming out of their houses and have restricted their movement. I don’t expect the situation of rickshaw pullers to improve anytime soon,” he rued.