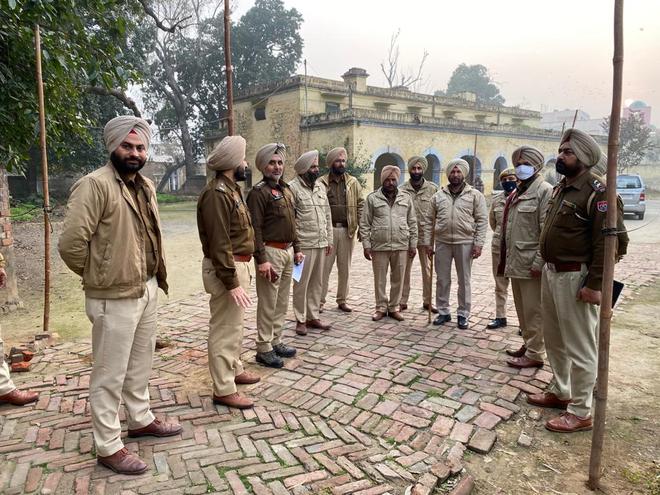 Upping the ante: Cops stand outside a polling station to keep a check on phoney voters in Gurdaspur on the election day.

Ahead of the civic poll, the Gurdaspur police had inputs that things could go off on a tangent on D-day if precautions were not taken. SSP Rajinder Singh Sohal went into a huddle with senior officers and decided to up the ante. He hit upon a unique idea. Cops in mufti were asked to stand in queues along with genuine voters. An officer, accompanied by his colleagues, would then walk up to one such cop and start an argument. Moments later, he would be pulled away from the queue and made to sit in the police vehicle in full public glare. The message that went out was that the police had identified bogus voters and “that they were being dealt with sternly in the police station.” The SSP later learnt only those people who were genuine voters came out to vote. That was an effective way of separating the wheat from the chaff.

Sri Hargobindpur Congress MLA Balwinder Singh Laddi seems to have dialed the right number after breaking off with his long time ally and Qadian MLA Fateh Jung Bajwa. At one time, this decade-old relationship seemed to have ‘permanence’ written all over it but then neither Bajwa nor Laddi knew that in politics nothing is permanent. Laddi has now hitchhiked himself on the bandwagon of Cabinet Minister Tript Rajinder Singh Bajwa.

Observers say this is a marriage of convenience. Incidentally, Bajwa’s son, Ravi Nandan Singh Bajwa is the Chairman of the Gurdaspur Zila Parishad. Both Laddi and Ravi Nandan are now working in tandem to ensure the former’s Assembly seat gets adequate funds from the coffers of the Punjab government and also the Gurdaspur Zila Parishad. Recently, Rs40 crore was disbursed among 193 villages of the Sri Hargobindpur seat. So far so good for Laddi; it is a case of neurons that wire together fire together.

It was a classic case of the pot calling the kettle black. During Gurbachan Singh Babbehali’s decade-long tenure as Gurdaspur MLA, several instances of civic body polls being rigged by the SAD-BJP combine had surfaced. Now, when the Congress hit the bull’s eye by winning all the 29 seats at stake, Babbehali cried foul. In a hurriedly convened press conference, the SAD leader claimed that Congress had “hijacked” the polls. It was indeed a case of sour grapes for Babbehali and Co. Some SAD (the acronym, incidentally, suits the sulking Akalis!) satraps even went to the extent of claiming that Congress workers had knocked down the door guarding the EVMs in the Meritorious School to tamper with the machines. This is getting a bit too ludicrous for comfort. The SAD leader conveniently forgot that the cops were guarding the room like they guard the Picasso’s in London’s National Gallery. In any case, there is a school of thought that such elections should be done away with and that the ruling dispensation in Chandigarh should instead nominate their loyalists. When somebody pointed to an officer engaged on poll duty that the Congress was using all its power to get its candidates elected, he was given this reply, “power corrupts and absolute power corrupts absolutely.” And as for sitting MLA Barindermeet Singh Pahra, he seems to be well-versed with Gersons law which states that “an advantage should be taken in any situation, regardless of ethics.” In this case the word political should be prefixed with ethics! (contributed by ravi dhaliwal)