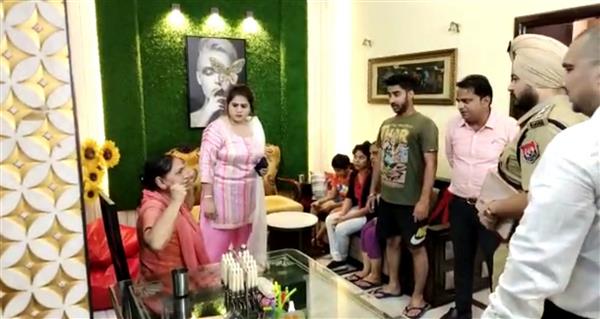 Police officials interact with the victim’s family in Amritsar on Thursday. Tribune photo

In yet another case of loot committed by taking family members hostage, two unidentified armed persons robbed a woman after holding her hostage at her house here on Thursday. The incident occurred in Rishi Vihar area falling under the Majitha Road police station.

The victim, identified as Sangeeta Malhotra, told the police that the two accused gained entry to the house after posing as RO mechanics. They told her that her son Sandeep Malhotra had sent them for service. She said they demanded a screw driver from her and when she went to bring the same, the accused followed her.

Gurbinder Singh, SHO, Majitha Road police station, said the incident occurred in the afternoon. He said a case was being registered while CCTV cameras in the locality were being analysed to find clues about the perpetrators. He said the probe was underway and accused would be arrested soon. He said the victim’s family would give details about the jewellery and cash robbed later on.