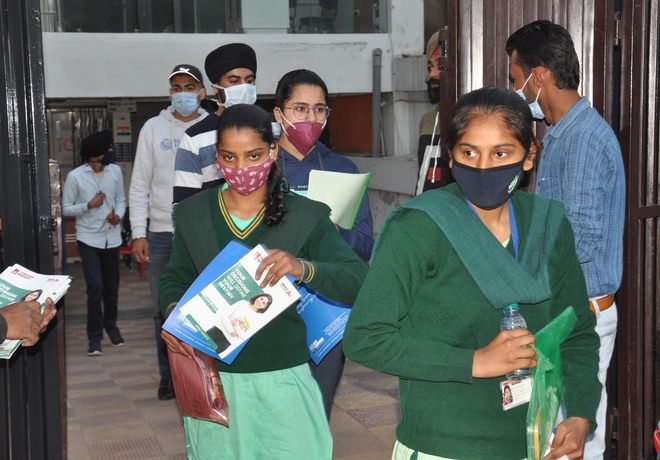 EXAM WARRIORS Students who appeared for the JEE (main) come out of an examination centre in Amritsar on Tuesday. Sunil Kumar

The JEE (Main) 2021 conducted by National Testing Agency began on Tuesday with a single session held in the evening.

The JEE (Main) is scheduled to be held from February 23 to 26 across the country and the first day of exam saw students taking BArch, BPlanning, while exam for various undergraduate engineering courses will be held on February 24 and 25. The examination is held in two sessions in its usual format, but only one session was conducted in city on Tuesday. Out of 126 candidates, who were scheduled to take the exam today, only 98 were present and 28 remained absent.

Regional Coordinator and City coordinator for JEE, Anjana Gupta, said that according to the SOPs by NTA, supervisors of exam centres had been asked to thoroughly sanitise the seating area before and after each shift. “The first day only had one evening shift while the consecutive days will see more students taking the exam. As far as conducting the exam keeping in mind Covid 19 health instructions go, there were no problems and things were conducted smoothly,” Anjana said. She said in city, the JEE Mains 2021 exam schedule will be held till February 25. Approximately 1,136 students are expected to take the JEE Mains for remaining days in Amritsar.

Due to Covid 19 situation, JEE Main will be conducted four times this year, in the months of February, March, April and May.

Meanwhile, for students, the four-times a year move has come as a respite in an otherwise stressful academic year. Tashvi, a Class XII student, who took the exam for BArch, said that the move is considerate. “The fact that those aspiring for JEE had a tough academic year due to online studies and pandemic has been considered by the NTA. The performance pressure is much less, given that paper was moderate.” Similarly, Pankaj Sharma, another Class XII student, who took the exam, said that apart from mathematics part, the paper was moderate.