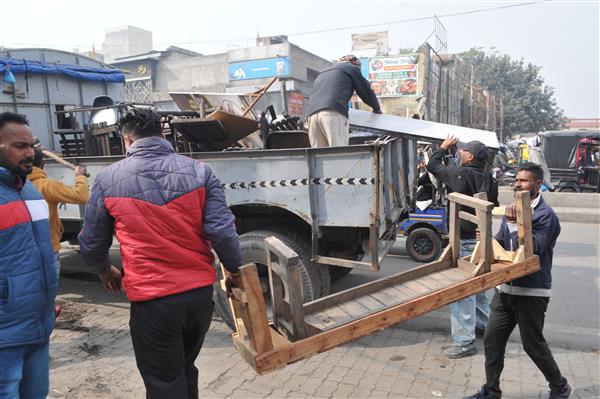 In the wake of the regular traffic jams, the Estate Wing of the Municipal Corporation (MC) shifted vends from bus stand area to vending zone outside the Suraj-Chanda-Tara here today. The vendors protested the action and kept their kiosks closed in protest.

The MC claimed that the vending zone in front of Suraj-Chanda-Tara is ready and as part of the campaign launched by the MC and the police to remove street vendors from roads and footpaths, the MC today shifted some vends to vending zone. Estate Officer Dharmendrajit Singh and Rambagh police station SHO Rajwinder Kaur, along with their respective teams visited Rambagh, Mansingh Chowk bus stand and removed the vends from the roads. During the drive, about 50 vends were shifted from these areas in front of the Suraj-Chanda-Tara complex.

Estate officer Dharmendrajit Singh said all vendors from Rambagh to Mana Singh Chowk and from the entry gate and exit gate of the bus stand will be shifted to the vending zone. He said the MC will continue the campaign together with the police.

The MC officials claimed that Smart market was being developed by the MC in front of Suraj-Chanda-Tara.

Municipal Health Officer Dr Kiran Kumar, along with his team, also reached the spot. He inspected the cleanliness in the market. He told the street vendors that the MC would ensure cleanliness in the vending zone and vendors should also cooperate in this. He said from tomorrow big and small dustbins will also be installed there and street vendors should put the garbage in the dustbin only.

Municipal Corporation Commissioner Sandeep Rishi said the street market outside the old vegetable market hall gate and in front of Suraj Chanda PVR has almost been prepared. He said street vending zones will be set up in other areas of the city as well.