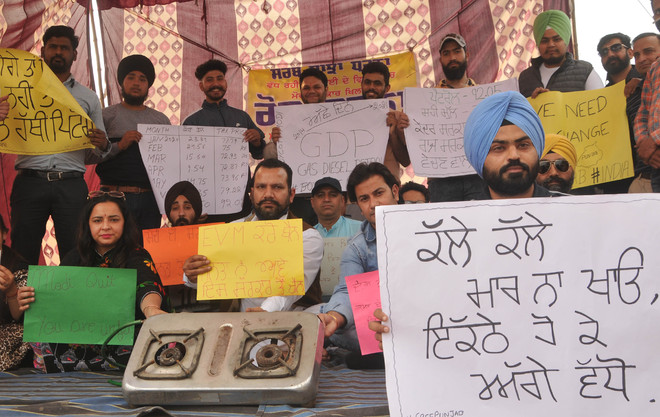 Residents stage a protest against the high fuel and LPG prices in Amritsar on Sunday. Vishal Kumar

People from different walks of life staged a protest against the rising inflation and a steep rise in the prices of essential commodities on the Bhandari Bridge here on Sunday.

They were holding placards and gas stoves. They said the Modi government termed every protest against their policies as opposition sponsored, but they were not supported by any political party.

A protester, Sukhraj Kalra, said he was a businessman and was compelled to take part in the protest due to high inflation at a time when the domestic economy was in recessionary phase. Instead of helping families from middle and lower income groups, the government was burdening them with high taxes.

He said the Modi government was waiting for the majority of Indians to die and then to hand over their assets to corporate honchos.

“The rise in the prices of essential commodities and fossil fuel has broken the common man’s back,” said another protestor Mandeep Kaur, a housewife. She said it had become difficult for them to afford an LPG refill which was costing over Rs 800 with a meagre subsidy of Rs 30 on it.

“Inflation has broken the common man’s back and leaders of the ruling party are making a mockery of people with Rs 15 lakh for each family as mere statement,” she said.

She questioned the sensibility of the Prime Minister behind his promise of Digital India when we could not offer a decent meal a day to the majority of the countrymen.