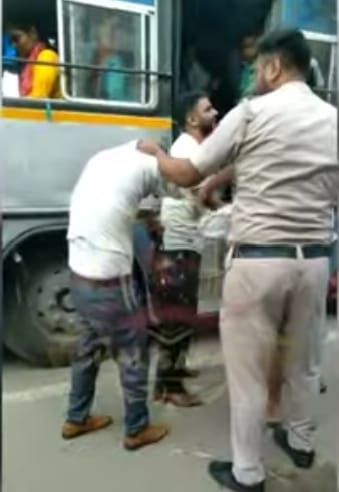 A policeman thrashes a conductor of a PRTC bus.

A policeman along with five others severely thrashed a conductor of a PRTC bus bound for Faridkot (from Amritsar) at the Naushehra Pannuan village bus stand here on Wednesday.

The bus conductor had asked the policeman to show the departmental voucher meant for free travel. The policeman took it as his insult and called his acquaintances to the bus stand to teach him a lesson.

As soon as the bus stopped at the Naushehra Pannuan bus stand, the policeman and his associates caught hold of the conductor and started beating him severely.

Soon a video of the incident went viral on social media and the police and civil administration visited the spot.

Sarhali SHO Sub-Inspector Parkash Singh visited the spot to take stock of the situation and collect the information. He said on the statement of bus conductor Ravinder Singh, a case under Sections 353, 186, 323, 506, 427, and 149 of the IPC had been registered against the accused.

The SHO said the accused policeman had been identified as Harprincepal Singh, who is posted in Amritsar, and his supporters were yet to be identified.