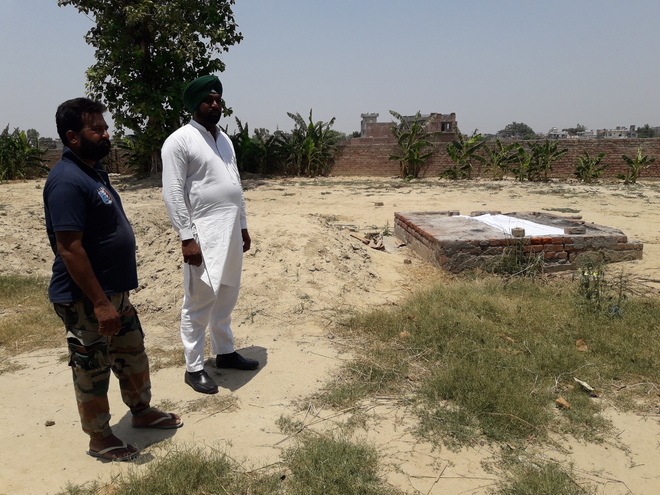 Burning issue The platform where people belonging to the SC community are cremated at Lauhuka village in Tarn Taran.

Though there have many instances of caste-based disparity in rural areas, an example of a deep-rooted discrimination was evident from the difference in the state of cremation grounds in villages. This phenomenon is more evident in Lauhuka village of Tarn Tarn district. There are no proper facilities in the cremation ground meant for the SCs. It is situated at a distance of 300 meters from the main road and is also not well laid. In the rainy season, people have to wade through puddles of water to reach the crematorium. There is no provision of drinking water here. Even the shed for protection from adverse weather conditions is missing. The platform to place the body is also not much elevated. There are no walls around it, while, the cremation ground meant for the ‘upper castes’ in the village is highly well-maintained. Even political leaders have often issued grants for the cremation grounds meant for the upper castes.

Literary tastes at a tender age

Sukhmanpreet Kaur, a student of Class X of Dasmesh Parivar International School, Aima Kalan, has developed her literary tastes at this age and has come out with flying colours. Her father is a driver by profession and mother is a homemaker who is inclined towards helping her daughter outshine others. Jaswant Singh Khalsa, chairman of the school managing committee, said, Sukhmanpreet always bags top position and remains active in not just educational but also other extra-curricular activities. She also writes essays on several topics and takes part in several sports competitions too

Four schools of the district have been awarded with cash prizes by the Department of Education for good performance in all aspects, in their respective category. Shaheed Naib Subedar Paramjit Singh Government Secondary School, Vein Poin, which gained the top position in the secondary school category, was given a prize of Rs1 lakh. In the high school category, Government High School, Chuslewar (Patti), was awarded with Rs7.5 lakh. A cash prize of Rs5 lakh, which was to be given in the middle category, has been divided in two equal shares of Rs2.5 each among Government Middle School, Chack Kare Khan, and Government Middle School, Dinewal. The prize money will be used for the development of the respective schools to provide better facilities to students, said Deputy Commissioner Kulwant Singh. The school heads concerned Parveen Kumari (Vein Poin), Jugraj Singh (Chuslewar), Inderjit Singh (Chack Kare Khan-Dinewal) have expressed their happiness over the selection of their schools for a better performance and assured to work more hard for the cause of society.

Appeasing farmers ahead of assembly poll

As the elections in Punjab are almost eight months away, the appeasement of voters has begun already. The Primary Agriculture Development Bank, Chohla Sahib, had reserved an amount of Rs5 crore meant to be lent to farmers and others for agricultural purposes. Baba Sahib Singh Gujarpura, chairman of the bank, said the step has been taken to protect the interests of farmers of the area. He said the amount was just Rs25 lakh last year. The bank had raised a target of 5 % to 10 % for the loan recovery, this year too. Meanwhile, Subeg Singh Dhunn, Chairman Market Committee, Tarn Taran, said in the current year, the committee had released Rs5.5 lakh to the victims who met with accidents while working in the fields. As many as 320 farmers out of 1,400 have been issued health card under the Ayushman Bharat Sarbat Sehat Beema Yojana, said the chairman. (Contributed by Gurbaxpuri)