The law of nature

Ridiculed for being a dwarf, Ruby now stands tall as a lawyer 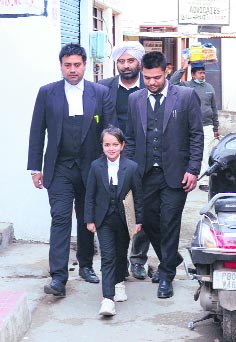 Picked on mercilessly as a kid, she started hating school. Skipping classes most of the time and secluding herself, her teenage years withered away in depression. That was also the time it dawned upon her that it wasn’t her fault after all.

Born a dwarf, she realised how mentally strong she is. Now 24, Harwinder Kaur, alias Ruby, stands tall as a lawyer who pledges to fight for differently-abled for free, as she can “feel the pain”.

“The scornful looks and words of ridicule forced me to doubt my capabilities as a child. Today, I am just 3 ft 11 inches tall, but now I see respect in the once-scornful eyes and the sly remarks have been turned into compliments. I feel proud of myself,” Ruby says.

She said her life had been one of a struggle but still went on not only to study law but also to win hearts. “I am currently practising law under District Bar Association vice-president Jagpal Singh Dhupar and want to pursue my career in judiciary,” she adds. A resident of Armaan Nagar in Rama Mandi here, Ruby said she came to know about her disability as a 10-year-old. All members in her family are of average height.

“I was in Class IV when I noticed my body was not growing normally. With this came a lot of teasing and bullying. By the time I reached senior secondary classes, I started skipping school and spent most of my days at home. But when I decided to face the world and took admission at the KCL Institute of Laws, life changed for the better. The things I missed in school, I experienced at college,” the law aspirant says.

Accepting herself the way she was instilled positivity and motivated her to fulfill all the dreams she had conjured. “Earlier, I wanted to be an air hostess but that was not possible, so I chose to study law and become a voice of the disabled,” Ruby says, adding, “People with insecurities and inferiority complexes now look up to me and appreciate my confidence.”

Daughter of an ASI, she believes in hard work, resilience and positive attitude as the key to success. With 50,000 followers on Instagram, she is already popular as a social media star.