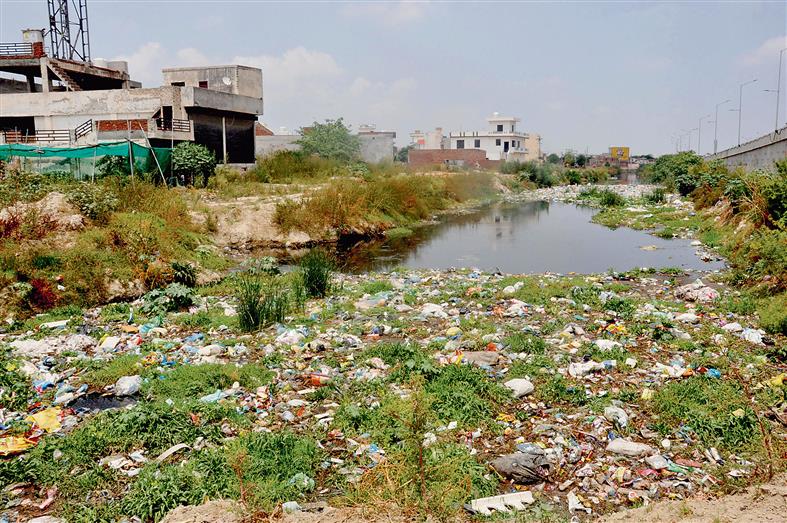 Residents of Mahal village and adjoining colonies are disgruntled with the authorities for failing to cover the Ganda Nullah (Tung Dhab drain) that passes near the localities. Though the work to cover the drain commenced several years ago, it is progressing at a snail’s pace while the problems of the residents are compounding over the years.

Foul smell emanating from the choked drain has become a health hazard for the residents. Mahal village was brought under the jurisdiction of the Municipal Corporation in 2007 while the colonies that mushroomed along the drain on the Amritsar-Attari bypass were regularised in 2013 by the then SAD-BJP government.

The residents rued that they had been paying property for the past several years, however, the authorities hadn’t done anything to alleviate their sufferings.

Manmohan Singh Dhillon, a resident of the Anmol Enclave area, said domestic and industrial waste, along with agricultural waste, was being discharged directly into the Tung Dhab drain which merges with Hudiara drain that falls into the Ravi. Now, in the absence of door-to-door garbage collection, many residents dump waste in the Nullah, causing blockage, he said. “The drain that was meant to carry storm water is being to discharge untreated solid waste, leading to contamination of groundwater,” Dhillon said, adding that work on covering the drain that commenced several ago had given a hope to the area residents, but with the slow pace of work, all hopes have crashed.

Balwinder Singh Kahlon, another resident, said harmful gases emanating from the drain not only caused health issues but led to breakdown of household electrical appliances, including refrigerators and air-conditioners, as well. “The gases damage copper pipes in a couple of years, leaving no option at hand but to replace these,” he said.

Residents alleged that the successive governments had only paid lip service while giving a scant regard to the health of its citizens. “Several programmes have been held as part of Mission Tandrust Punjab, but nothing has changed on the ground,” said anguished Sikander, another resident of a private locality in Mahal village.

Mayor Karamjit Singh Rintu Mayor said as far as the door-to-door lifting of garbage was concerned, the job is handled by a private company engaged by the MC which lifts garbage from every area falling under the MC limits. “When sewerage pipes were being laid on the Ram Tirath road, many areas became unapproachable and that’s when the problem was faced. Now the door-to-door garbage lifting service has resumed. I will get resolved any problem that surfaces,” he said. He said the work on covering the Tung Dhab drain was being done by the Water Supply and Sewerage Board, so only officials of the board could comment on the issue.