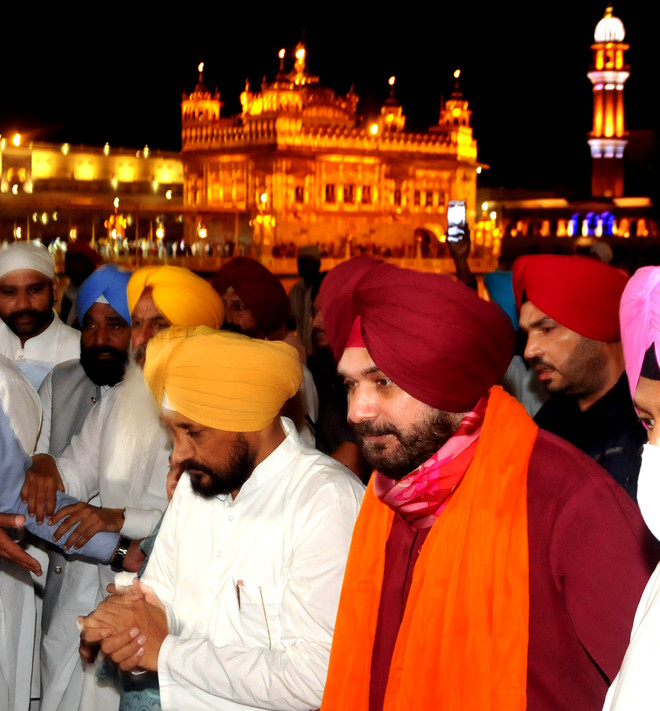 Chief Minister Charanjit Singh Channi on Wednesday paid obeisance at the Golden Temple here and stated that justice would be done in the sacrilege incidents.

Flanked by his deputies Sukhjinder Singh Randhawa and OP Soni, PCC president Navjot Singh Sidhu and other colleagues, Channi participated in the early morning rituals of installation of Sri Guru Granth Sahib at the sanctum sanctorum of the Golden Temple.

Amid the recital of Gurbani kirtan, Channi and Sidhu gave shoulder to the ‘palki’ carrying the holy saroop from the Akal Takht as per the Sikh ‘rehat maryada’.

Referring to the 2015 sacrilege incidents at Bargari, Channi said the government’s priority would be to bring justice. “Guru nu insaaf dwaiya jayega’, he said.

Sidhu said the real issues in today’s politics were ignored. “Our CM will bring politics back on real issues. If we cannot solve the people-oriented issues, then we are not real Sikhs. Religion speaks of providing food to hungry, making the crying laugh and providing shelter to those who do not have one. That’s the true religion,” he said.

Sidhu said merit will be honoured. “Every Congress worker will fight for the truth, which will be victorious.”

What I have experienced in the past two days with the humble Chief Minister, I have never felt so in the past 17 years of my political career. I feel for the first time that now the Congress can serve people without any distress. — Navjot Singh Sidhu, PCC Chief

The Chief Minister and other dignitaries received siropa (robe of honour) and a replica of Golden Temple by SGPC general secretary Bhagwant Singh Sialka and manager Gurinder Singh.

Later, the Congress leaders visited the Jallianwala Bagh to pay homage to the martyrs of the 1919 massacre. This was followed by a visit to the Durgiana Mandir and Ram Tirath Sthal.