CHANDIGARH: The three accused in the 2017 auto gang rape case were on Monday held guilty by the court of Additional Sessions Judge Poonam R Joshi. 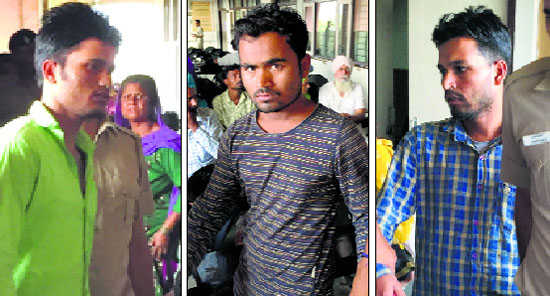 The three accused in the 2017 auto gang rape case were on Monday held guilty by the court of Additional Sessions Judge Poonam R Joshi. The quantum of their sentence will be pronounced on Friday. Mohammad Irfan (29), Mohammad Garib (23) and Kismat Ali (23) were accused of raping a 22-year-old girl in November 2017.

The accused had been charged under Sections 376D (gang rape) and 506 (criminal intimidation) of the IPC. The DNA of all three accused had matched with that of the victim, thus confirming the crime. Mohammad Irfan is an accused in a similar case which dates back to December 2016.

The victim, who hails from Dehradun, stayed in a rented accommodation in Mohali and was returning home from her typing classes in Sector 37 at night. She boarded the auto-rickshaw, which already had the three accused, including the driver in it. The auto driver reportedly drove towards the forest area in Sector 53, where the three allegedly raped her. The images of the accused were caught in a CCTV camera installed at the Sector 42 petrol pump where the accused had stopped to get the fuel tank refilled.

Irfan (29), the auto driver, was the first one to be arrested on November 24 and had named the other two accused. The duo was arrested the next day from Uttar Pradesh. Earlier, the police had announced a Rs 1 lakh reward for information on the accused.

The police had informed that the crime was planned. The three had consumed alcohol and had decided to rape a passenger. The auto-rickshaw was rented from a contractor and had a temporary registration number. When the victim boarded the auto, Ali and Garib posed as co-passengers.

Instead of driving towards Mohali, the auto was first taken to a petrol pump in Sector 42. This is where the accused’s visuals were captured in a CCTV camera. The auto was later taken into the forest area in Sector 53 where the victim was raped. She was left on the road and was seen crying by a passerby, who informed the police.

How the case progressed

May 9  The victim records her statement in the court

May 23  Police file supplementary challan; DNA of all three accused matches with that of the victim.

Aug 21  Trial in the case ends

The Dehradun-based victim has not informed her parents about the incident till date. Three days after the crime, Chandigarh Tribune had exclusively reported the matter and at time also, the victim had stayed strong and sought the help of only her friends. Till date, be it visits to the police station or the court, the victim has been seen accompanied by her friends.

The special court for crimes against women and children, which passed this order, seems to have issued a virtual gag order on its staff about speaking to the media. The staff refused to speak to the media and denied knowledge of this case. However, later when this correspondent told the staff that he already had knowledge that the accused had been held guilty, the staff confirmed the same. Apparently, some media reports related to the court have led to this development. This, in the era of the SC allowing mediapersons to even bring in mobile phones in courtrooms.