PANCHKULA: Finally, the Panchkula police have booked dera chief''s adopted daughter Honeypreet Insan, who has gone into hiding, for inciting violence in Panchkula on August 25. 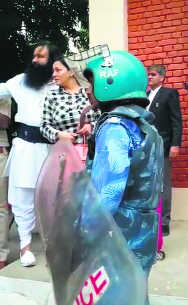 A file photo of Honeypreet with the dera chief.

Finally, the Panchkula police have booked dera chief's adopted daughter Honeypreet Insan, who has gone into hiding, for inciting violence in Panchkula on August 25.

The police have included Honeypreet’s name as an accused in FIR No. 345, registered at the Sector 5 police station, according to Panchkula Police Commissioner AS Chawla.

The police had already issued a lookout notice for her and conducted raids in Haryana, Rajasthan, Uttar Pradesh and border areas of India and Nepal.

Honeypreet, in her thirties, accompanied the dera chief when he was brought to the special CBI court in Panchkula for the pronouncement of the verdict in the 15-year-old rape case on August 25. Honeypreet was last seen with the dera chief outside the court and in a chopper arranged to take Ram Rahim to a jail in Rohtak.

Honeypreet was last seen with the dera chief outside the court and in a chopper arranged to take Ram Rahim to a jail in Rohtak.

During the interrogation of Surender Dhiman Insan, Dilawar Insan and others, who are close to the dera chief, Honeypreet’s name surfaced as a key consipirator in inciting violence in Panchkula, due to which 35 people were killed and over 200 injured. Among the list of the 43 wanted in connection with the Panchkula violence, Honeypreet’s name is on the top. In the list, dera spokesperson Aditya Insan’s name figured on number 2.