NO one predicted that India's most populous state with a 40-million Muslim minority would give such a clear majority to a party that has always been clear and loud of its right, saffron stand. 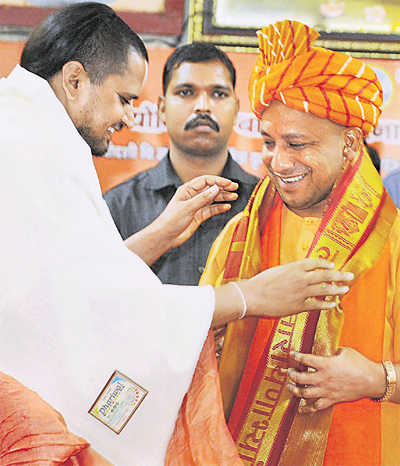 THE YOGI & THE CM: Yogi Adityanath, the UP Chief Minster being greeted at the Gorakhnath mandir, Gorakhpur.

NO one predicted that India's most populous state with a 40-million Muslim minority would give such a clear majority to a party that has always been clear and loud of its right, saffron stand. Many argued, and rightly to a great extent, that the vote was an endorsement not of a party but of one single man: Narendra Modi. His voice echoed time and again, mocking and ridiculing India's past leaders for their corruption and pusillanimity. He promised a "new India"; developed and corruption free. Many argued that maybe the man had a point, even if his past carried sinister shades of communalism, maybe he deserved a fresh chance at proving that vikas was his main agenda.

The man won our trust and carried our hopes and dreams with him. And then he did a u-turn and proved that one's intrinsic character never changes. The clothes one wears can get sharper and accents more globalised, but alas the heart will always hold on to the dreams of our youth. The picking of Yogi Adityanath as the Chief Minister of Uttar Pradesh is the loudest, hardest, chest thumping that the Prime Minister has indulged in since becoming "our leader". If one cares to listen carefully, his chest thumping was also accompanied by snide laughter. The man can afford his laughter, he fooled us yet again.

There are two messages that the Prime Minister has sent out with his choice of the Yogi. The gloves are off and the writing on the wall is clear. This is the beginning of the Hindu Rashtra. "Too bad if you don't like the idea; and one can always leave if you really have a problem with the concept" --- is the quiet threat that comes packaged with the idea.

Where does it leave India's minorities; the Muslims, Sikhs, Christians, Parsis, Buddhists and so on? Our school textbooks still teach us that the Constitution declares this nation to be a secular state. So now maybe the next step would be to update the textbooks. It would be a mistake today for anyone who believes in the separation of the Church and State not to be alarmed by the Saffron wave sweeping this nation. People are suddenly emboldened to suggest that the RSS Chief could be the next President. The liberals have gone quiet or rather made a silent conversion to the majority view. It is, after all, an easier option and survival is the instinct that drives "thinkers" these days. Globally, the message that our globe-trotting Prime Minister has sent is even more disturbing. He has basically informed the world that the “new India” will bear his signature. Nehru is buried deep down and his mollycoddling of the minorities is a silly mistake this nation will not make again. If the new United States President can try and impose a travel ban from Muslim-majority countries, our man has a better idea. We can ask our Muslims to leave if they are unhappy with the changes. This was never their nation, to begin with.

Luckily for Prime Minister Modi, the world is in a state of flux and the movement to the Right is happening everywhere. So he really isn't alone. He and the US President share a far greater "vision" than he ever did with Barack Obama. The dangerous difference is that there are still many in the US and Europe who will scream hoarse every time Trump pushes his Islamophobia too far; in India the voices have gone silent. While editorials in the New York Times to almost every leading international publications wondered at the Prime Minister's choice, the sad truth is that Modi can afford to ignore them. They are the Left liberals he has always detested and had scant respect for. The ones back home have quickly discovered the advantages of wearing orange. Our leader has nothing to worry about.

Legally or technically there is no wrong the Prime Minister has done in chosing Yogi Adityanath to head Uttar Pradesh. However, he has violated the spirit of the Constitution and of this nation. The Prime Minister stands accused of having betrayed the trust of many secular Hindus who wanted vikas and not a mandir. The Prime Minister has turned the clock back by settling on Yogi. He has taken this nation back to the mandir politics and the vikas agenda will soon get lost in all this heightened passions of madness.

As minorities we are destined to a future where we could well be second-class citizens soon. The electoral success of Uttar Pradesh is heady, the state of the Opposition is pathetic and it is virtually in tatters. There is no leader to counter the man of the moment. This brazen truth is what finally convinced Modi to shed the masks and to let his real face emerge. The dream of a Hindu Rashtra now starts in full earnest. The only thing standing between that project and the torn secular fabric of this nation is the collective voice of our conscience. If we don't listen to its mumblings even now, like everything else,  it too might die in this saffron blaze. We can choose to continue sleeping or make an effort to say the right things. The choice, as always, rests with us.